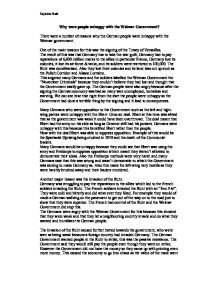 Why were people unhappy with the Weimar Government?

Why were people unhappy with the Weimar Government? There were a number of reasons why the German people were unhappy with the Weimar government. One of the main reasons for this was the signing of the Treaty of Versailles. The result of this was that Germany has to take the war guilt, Germany had to pay reparations of 6,600 million marks to the allies in particular France, Germany lost its colonies, it lost its air force & tanks, and its soldiers were restricted to 100,000. The Ruhr was demilitarised. Also they lost their colonies and its land was cut up such as the Polish Corridor and Alsace Lorraine. This angered many Germans and the soldiers labelled the Weimar Government the "November Criminals" because they couldn't believe they had lost and thought that the Government easily gave up. ...read more.

Many Germans would be unhappy because they could see that Ebert was using the army and Freikorps to suppress opposition which meant they weren't allowed to demonstrate their ideas. Also the Freikorps methods were very harsh and many Germans saw that this was wrong and wasn't democratic to which the Government was aiming to make Germany as. Also this made the left-wing very hostile as they were harshly brushed away and their leaders murdered. Another major reason was the invasion of the Ruhr. Germany was struggling to pay the reparations to the allies which led to the French soldiers invading the Ruhr. The French soldiers invaded the Ruhr with an "Iron Fist". They were cold and bitterly and did what ever they liked. For example they would of made a German walking on the pavement to get out of the way on to the road just to show that they were superior. ...read more.

Many Germans lost out on this including the middle class who saw their businesses being destroyed and pensioners as the money which they had saved up their whole life was now worth very little. However there were some who benefited including people who took pout loans as they could now easily pay as the loan was fixed. Many Germans hated the Government for this as they caused the hyperinflation and left the economy in chaos. As Germans were becoming even more hostile towards the government, there was more opposition including the Munich Putsch in 1923, led by Hitler, who tried to overthrow the Bavarian government but was suppressed by the police. Overall we can see that a majority of people were unhappy with the Weimar Government and that it was all types of German people from old, young to left and right wing- parties. We also have to consider that it all started with the signing of the Treaty of Versailles which caused major problems in Germany. Rajinder Bath ...read more.