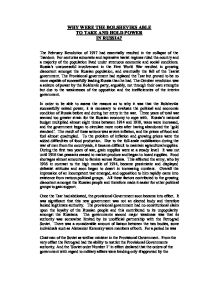 WHY WERE THE BOLSHEVIKS ABLETO TAKE AND HOLD POWERIN RUSSIA?

WHY WERE THE BOLSHEVIKS ABLE TO TAKE AND HOLD POWER IN RUSSIA? The February Revolution of 1917 had essentially resulted in the collapse of the Tsardom. For centuries autocratic and repressive tsarist regimes ruled the country and a majority of the population lived under strenuous economic and social conditions. Russia's unsuccessful involvement in the First World War resulted in growing discontent amongst the Russian population, and eventually the fall of the Tsarist government. The Provisional government had replaced the Tsar but proved to be no more capable of successfully leading Russia than he had. The October revolution was a seizure of power by the Bolshevik party, arguably, not through their own strengths but due to the weaknesses of the opposition and the inefficiencies of the interim government. ...read more.

The result of these actions was severe inflation, and the prices of food and fuel almost quadrupled. To the problem of inflation and growing prices were the added difficulties of food production. Due to the full-scale mobilisation during the war of men from the countryside, it became difficult to maintain agricultural supplies. During the first two years of war, grain supplies were at a steady level. It was not until 1916 that peasants ceased to market produce and began to hoard supplies. Food shortages almost amounted to famine across Russia. This affected the army, who by 1916 in contrast to the high morale of 1914, became pessimistic and displayed defeatist attitudes and soon began to desert in increasing numbers. Overall the impression of an incompetent tsar emerged, and opposition to him rapidly came into existence from various political groups. ...read more.

There was a considerable amount of liaison between the two bodies, some individuals such as Alexander Kerensky were members of both. For a period he was Chairman of the Soviet as well as minister in the Provisional Government. From the very offset the Petrograd had the ability to restrict the Provisional Governments authority. And the 'Soviet order Number 1' in effect declared that the orders of the government with regard to military affairs were binding only if approved by the Petrograd Soviet. This drastically undermined the Government as any government which cannot directly control its army, cannot wield real power. After the fall of the Tsar there was an initial feeling of post revolutionary euphoria in Petrograd. However as the years wore on and the problems mounted, The provisional Government moved increasingly to the right and the Petrograd Soviet increasingly to the left, and soon the partnership of the Dual authority began to decay. ...read more.