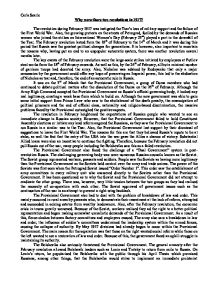 Why were there two revolutions in 1917?

Carla Searle Why were there two revolutions in 1917? The revolution during February 1917 was instigated the Tsar's loss of military support and the failure of the First World War. Also, the growing protests on the streets of Petrograd, fuelled by the demands of Russian women who joined the strikes on International Women's Day (February 23rd) played a part in the downfall of the Tsar. The February revolution lasted from the 18th of February to the 14th of March and it was during this period that Russia saw the greatest political changes for generations. It is however, also important to ascertain the reasons why, having put an end to an unpopular autocratic system, there was another revolution several months later. The key events of the February revolution were the large-scale strikes initiated by employees at Putilov steel works from the 18th of February onwards. As well as this, by the 26th of February, all but a minimal number of garrison troops had deserted the army. Also, Nicholas was advised by Rodzyanko that only a major concession by the government could offer any hope of preserving an Imperial power, this led to the abdication of Nicholas as tsar and, therefore, the end of an autocratic rule in Russia. It was on the 3rd of March that the Provisional Government, a group of Duma members who had continued to debate political matters after the dissolution of the Duma on the 26th of February. ...read more.

The Soviet approved of government issues such as the continuation of the war in an attempt to prevent a right-wing backlash. The Provisional Government also had to deal with the problem of breakdown of law and order. This mainly occurred in rural areas by peasants who, to demonstrate their resentment at the lack of reform, attempted and succeeded in seizing estates from wealthy landowners. Also, after the February revolution, the economic crisis in towns greatly worsened. Because of the Soviet, workers realised they ad the right to a better political representation and began making somewhat unrealistic demands of the Provisional Government. As a result of this, fierce clashes between factory committees and employers ensued. The army also saw a breakdown in law and order; the influence of soldier's committees undermined the leadership system within the armed forces, causing the collapse of authority. By May 1917 divisions had already begun to occur within the Provisional Government. The main reason for the separation was that those on the right wanted social reform while those on the left wanted to see a restoration of law and order. Because of this, the government faced an uphill struggle in maintaining its authority. The Bolsheviks also seriously threatened the Provisional Government. The general amnesty after the February revolution allowed Bolshevik leaders such as Lenin and Trotsky to return from exile to Russia. ...read more.