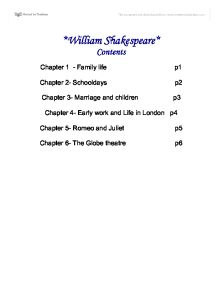 *William Shakespeare* Contents Chapter 1 - Family life p1 Chapter 2- Schooldays p2 Chapter 3- Marriage and children p3 Chapter 4- Early work and Life in London p4 Chapter 5- Romeo and Juliet p5 Chapter 6- The Globe theatre p6 Chapter 0ne- Family life When John and Mary Shakespeare gave birth to their first child, Joan, their happiness was short as the baby died of the plague shortly after birth. Mary became pregnant again in 1562 and gave birth to another child named Margaret. She only lived for one year. On the 23rd of April 1564 William Shakespeare was born in a town called Stratford- Upton-Avon. In the 1560s the village had a population of 1500 people and only 200 houses. *This house in Stratford is known as "Shakespeare's Birthplace" Interesting facts about Shakespeare's family *John Shakespeare was a very successful glove maker *Mary Arden married John Shakespeare in 1557 *William ...read more.

Participating in drama was also a key part of the curriculum; if Shakespeare didn't participate he wouldn't have known how to write plays. William Shakespeare at school. 2 Chapter 3- Marriage and children When Shakespeare was 18 he married Anne Hathaway (who was 26), on the 29th of November 1582 at Temple Grafton, near Stratford. Six months after the wedding, Susanna was born in 1583. Two years later they gave birth to Hamnet and Judith in 1585. There were regular outbreaks of the Bubonic Plague (known as the Black Death during Elizabethan times) Sadly Hamnet caught the deadly disease in 1596 and died at the age of eleven. William Shakespeare when he was18 years old 3 Chapter 4- Early work and life in London When Shakespeare was in his late twenties, he was well established in the theatre. ...read more.

5 Chapter 6- The Globe theatre The Globe was built in 1599 using timber from an earlier theatre that had been built by James Burbage in 1576. On the 29th of June 1613, the Globe Theatre went up in flames during a performance of Henry the Eighth. A theatrical cannon, set off during the performance, it misfired, and the wooden beams burst into flames. According to one of the few documents of the event, no one was hurt except a man who put out his burning breeches with a bottle of ale. The Globe theatre was a three-story, open-air theatre between 97 and 102 feet in diameter that could house up to 3,000 spectators. Normally, everyday, at 2'oclock a show would be preformed it would be comedy, Romance or tragedies. 6 ...read more.