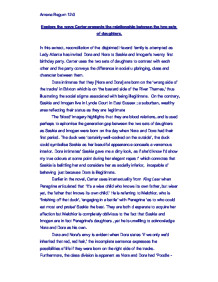 Wise Children. Explore the ways Carter presents the relationship between the two sets of daughters

Explore the ways Carter presents the relationship between the two sets of daughters. In this extract, reconciliation of the disjointed Hazard family is attempted as Lady Atlanta has invited Dora and Nora to Saskia and Imogen's twenty first birthday party. Carter uses the two sets of daughters to contrast with each other and the party conveys the difference in social upbringing, class and character between them. Dora intimates that they [Nora and Dora] are born on the 'wrong side of the tracks' in Brixton which is on 'the bastard side of the River Thames,' thus illustrating the social stigma associated with being illegitimate. On the contrary, Saskia and Imogen live in Lynde Court in East Sussex; a suburban, wealthy area reflecting their status as ...read more.

Dora intimates' Saskia gave me a dirty look, as if she'd know I'd show my true colours at some point during her elegant repast' which connotes that Saskia is belittling her and considers her as socially inferior, incapable of behaving just because Dora is illegitimate. Earlier in the novel, Carter uses intertextuality from King Lear when Peregrine articulated that 'It's a wise child who knows its own father, but wiser yet, the father that knows its own child.' He is referring to Melchior, who is 'finishing off that duck', 'engaging in a battle' with Peregrine 'as to who could eat most and praise' Saskia the best. ...read more.

Ironically, at Melchior's one hundredth birthday party, there is reversal as Saskia and Imogen attend looking ridiculous. The reader is aware that perhaps Dora is an unreliable, biased narrator as she has a snide, criticising tone and ridicules Imogen "always the fey one, had 'dressed up to match the Downs around us' she simpered in an eighteenth century shepherdess's dress." Saskia and Imogen are featured in the 'William Hickey column' as they are recognized as Melchior's daughters, differently, Nora and Dora have no such status. Wise Children has a mirrored structure and this gathering foreshadows Melchior's party in chapter five where the relationship between the two sets of daughters balance out. Melchior, finally, acknowledges Nora and Dora as his daughters while Saskia and Imogen discover they are illegitimate, the result of Lady Atalanta's affair with Peregrine. ?? ?? ?? ?? Amena Begum 12:0 ...read more.