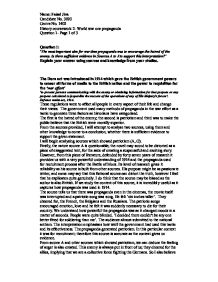 Question 1: 'The most important aim for war time propaganda was to encourage the hatred of the enemy. Is there sufficient evidence in Sources A to J to support this interpretation?' Explain your answer using sources and knowledge from your studies. The Dora act was introduced in 1914 which gave the British government powers to censor all forms of media to the British nation and the power to requisition for the 'war effort' 'to prevent persons communicating with the enemy or obtaining information for that purpose or any purpose calculated to jeopardise the success of the operations of any of His Majesty's forces'. Defence realm act, 1914. These regulations were to affect all people in every aspect of their life and change their views. The government used many methods of propaganda in the war effort as a tactic to generate three factors as historians have categorised. The first is the hatred of the enemy; the second is patriotism and third was to make the public believe that the British were morally superior. From the sources provided, I will attempt to analyse two sources, using them and other knowledge to come to a conclusion, whether there is sufficient evidence to support the given statement. ...read more.

'Don't tell him all your troubles'. Here we find that patriotism was particularly used two instances, designed to raise spirits, similar to source A. this was obviously important as, the women were also considered to be part of the effort, not just on the battlefield. The caption mentions that it was a popular song in 1916 at the home front. Theses songs would give us an important reflection on to the censored thinking and spirits people had. It clearly reflects the condition of the home front, as well as financial problems. 'Eldest boy want trousers and rent is overdue'. Therefore, we can understand how important the government thought the home front would be, through our own knowledge, peoples gardens were used to grow crops and there was limited amount of food, clearly we can see that the government used patriotism to raise spirits at home as well as recruiting soldiers, which played a vital role in securing victory. Patriotism was important to ensure that morale was high, and that recruiting was constant. I will now study, the element of moral superiority, to help us identify which was more important. ...read more.

perhaps the hatred of the enemy was always there to keep people steadfast, however I feel that there was no real main objective, rather an amalgamation, a tactic generate a collective force against the Germans, whether it was being morally superior or patriotic. Hatred of the enemy could have been possibly prioritised; the patriotism and moral superiority may have created hatred of the enemy, because if you believe that your fight is moral, and you love your country willing to sacrifice for it, you will hate the other side. However, although this is from my own insight, I don't really think there is sufficient evidence to support this. But what the main message is is the government use of what ever worked, at the time of decrease in soldiers, there was sudden patriotism for recruitment and the fact that Britain was losing was covered. As historians we can take this to understand how the government used propaganda and not to make the same mistakes again. This is a typical tactic also used in ww2 with the emergency defence policy. ?? ?? ?? ?? Name: Faisal Jiva Candidate No. 3093 Centre No. 1402 History coursework 2- World war one propaganda Question 1- Page 1 of 3 ...read more.