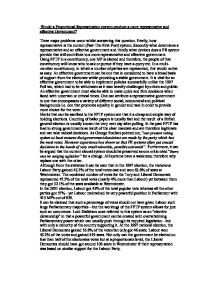 Would a Proportional Representation system produce a more representative and effective Government?

In the 2001 election, Labour got 43% of the total popular vote whereas all the other parties got 57% - yet Labour maintained its very powerful position in Parliament with 413 MP's out of 659. It can be claimed that such a percentage of votes should not have given Labour such large Parliamentary majorities - but the workings of the FPTP system allows for just such an occurrence. Lord Hailsham once referred to this system as an "elective dictatorship" in that a powerful government can be created with overwhelming Parliamentary power which can usually push through its required legislation - but with only a minority of the country supporting it. At the 1997 national election, the Liberal Democrats gained 16.8% of the votes but only got 46 seats. Labour won 43.2% of the votes and gained 419 seats. Not only can the government be elected on less than half of the electorates votes but at a proportionate level, the Liberal Democrats should have got around 106 seats in Westminster if their representation was based on similar support for the Labour Party. ...read more.

won a constituency vote in the 1997 election and he lost his attempt to win another independent seat in 2001 using FPTP. An argument put forward against FPTP is that it might put people off of voting in an election for a minority party as they know that their vote will be wasted. The two-party system (which can sometimes been seen both positive and negative) is usually eliminated using PR and the end result is more 'pluralist'. The possibility of single-party 'elective dictatorship' is greatly diminished although does not completely rule out the possibility as can be seen from the elections in Sweden using PR system. The two main PR systems that I will analyse are AMS and STV. The STV system is in use in Australia (for the Senate), the Republic of Ireland and in Northern Ireland (for European elections and also for elections to the new Northern Ireland Assembly) This system assumes that the country is divided into multi-member constituency and parties may put up as many candidates as there are seats available in that constituency. ...read more.