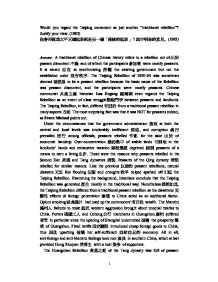 Would you regard the Taiping movement as just another

Would you regard the Taiping movement as just another "traditional rebellion"? Justify your view. (1982) ????????????????????????????????(1982) Answer: A traditional rebellion of Chinese history refers to a rebellion out of?? peasant discontent?? and of which the participants??? were mostly peasants. It is aimed?? at overthrowing?? the existing government but not the established order????. The Taiping Rebellion of 1850-64 was sometimes deemed??? to be a peasant rebellion because the basic cause of the Rebellion was peasant discontent, and the participants were mostly peasants. Chinese communist???? historian Luo Ergang??? even regards the Taiping Rebellion as an event of class struggle???? between peasants and landlords. The Taiping Rebellion, in fact, differed??? from a traditional peasant rebellion in many aspects??. The most surprising fact was that it was NOT for peasants indeed, as Franz Michael points out. Under the circumstances that the government administration?? at both the central and local levels was intolerably inefficient??, and corruption?? prevailed?? among officials, peasants rebelled?? for the sake?? of economic hardship. Over-concentration???? of arable lands??? in the landlords' hands and exhaustive taxation???? deprived?? peasants of a means to earn a living??. These were the reasons why peasants rebelled in the Second Han?? and Tang dynasties??. Peasants of the Qing dynasty?? rebelled for similar reasons. ...read more.

in China based on both Christianity and the Rites of Zhou. Peasants of a traditional rebellion simply fought?? for lands; however, the Taiping system did not provide peasants with private ownership of lands????. Peasants cultivated?? the land but had to share the harvests?? with others. Franz Michael therefore says that the Taiping Rebellion was NOT for peasants. Neither?? was it an event of class struggle, because the Taiping enemies were not landlords but peasants. Zeng Guofan's??? Hunan Braves?? and Li Hongzhang's??? Huai Army?? consisted?? mainly of peasants. Class consciousness???? did not exist in China, either. Jian Youwen??? points out that in the hierarchy of ranks???? of the Taiping Kingdom peasants were placed in the lowest stratum??. In the economic sense, primitive communism?????? was implemented?? in the Taiping institutions??. However, the political system was like that of a traditional Chinese dynasty. There were kings??, generals?? and master sergeants??. Moreover, the Taiping leaders struggled to get the throne??, which was a traditional selfish motive??. Organizations of a traditional peasant rebellion were usually loose?? and poor, whereas?? the Taiping rebels had an efficient military organization learnt from Qi Jiguang???of the Ming dynasty??. ...read more.

of 1858-60. So immediately after the Taiping Rebellion there was a honeymoon??? between China and the West. On the contrary???, the Taiping Rebellion indirectly led to more losses of China's sovereignty. During the Rebellion the British started to take charge?? of the Imperial Maritime Customs Service???? while foreign settlements?? in Shanghai expanded??. The more important influence of the Taiping Rebellion lay?? in its impacts?? upon the future political and social revolutions. Hong Xiuquan's work inspired?? Dr. Sun Yixian??? to take up a revolutionary career??. The Taiping remnants???? supported Dr. Sun while some ideas of the Taiping Movement were borrowed in his Three Principles of the People (Sanmin Zhuyi????). Hence??, compared to a traditional peasant rebellion which simply caused economic destruction, the Taiping Rebellion did much more because it provided with a blueprint?? for the unprecedented Chinese republican revolution of 1911. The use of the plain language???, punctuations???? and ideas of woman liberation during the Taiping Movement were advocated?? again in the New Cultural Movement????? of the early twentieth century. To sum up, apart from?? the reasons for peasant discontent, quality of both the leaders and followers, manipulation of religions and economic destruction, the other elements?? and impacts of the Taiping Rebellion were greatly different from a traditional peasant rebellion. It had its own unprecedented characteristics. 1 ...read more.