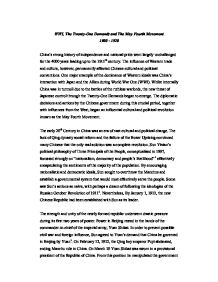 WWI, The Twenty-One Demands and The May Fourth Movement

WWI, The Twenty-One Demands and The May Fourth Movement 1900 - 1920 China's strong history of independence and national pride went largely unchallenged for the 4000 years leading up to the 19thth century. The influence of Western trade and culture, however, permanently affected Chinese cultural and political conventions. One major example of the dominance of Western ideals was China's interaction with Japan and the Allies during World War One (WWI). Whilst internally China was in turmoil due to the battles of the ruthless warlords, the new threat of Japanese control through the Twenty-One Demands began to emerge. The diplomatic decisions and actions by the Chinese government during this crucial period, together with influences from the West, began an influential cultural and political revolution known as the May Fourth Movement. The early 20th Century in China was an era of vast cultural and political change. The lack of Qing dynasty social reform and the failure of the Boxer Uprising convinced many Chinese that the only real solution was a complete revolution. Sun Yixian's political philosophy of Three Principals of the People, conceptualised in 1897, focussed strongly on "nationalism, democracy and people's livelihood"1 effectively encapsulating the sentiments of the majority of the population. By encouraging nationalistic and democratic ideals, Sun sought to overthrow the Manchus and establish a governmental system that would most effectively serve the people. Some saw Sun's actions as naive, with perhaps a dream of following the ideologies of the Russian October Revolution of 19112. Nevertheless, By January 1, 1912, the new Chinese Republic had been established with Sun as its leader. The strength and unity of the newly formed republic underwent drastic pressure during its first two years of power. Power in Beijing rested in the hands of the commander-in-chief of the imperial army, Yuan Shikai. In order to prevent possible civil war and foreign influence, Sun agreed to Yuan's demand that China be governed in Beijing by Yuan3. ...read more.

The article relating to the opening of trade marts in Eastern Inner Mongolia in respect to location and regulations, may, following their precedent set in Shantung, be the subject of an exchange of notes. 6. From the phrase "those interested in the Company" in Group III of the revised list of demands, the words "those interested in" may be deleted. 7. The Japanese version of the Formal Agreement and its annexes shall be the official text or both the Chinese and Japanese shall be the official texts. Chinese Reply to Japanese Ultimatum, May 8, 1915 On the 7th of this month, at three o'clock P.M., the Chinese Government received an Ultimatum from the Japanese Government together with an Explanatory Note of seven articles. The Ultimatum concluded with the hope that the Chinese Government by six o'clock P.M. on the 9th of May will give a satisfactory reply, and it is hereby declared that if no satisfactory reply is received before or at the specified time, the Japanese Government will take steps she may deem necessary. The Chinese Government with a view to preserving the peace of the Far East hereby accepts, with the exception of those five articles of Group V postponed for later negotiations, all the articles of Groups I, II, III, and IV and the exchange of notes in connection with Fukien Province in Group V as contained in the revised proposals presented on the 26th of April, and in accordance with the Explanatory Note of seven articles accompanying the Ultimatum of the Japanese Government with the hope that thereby all the outstanding questions are settled, so that the cordial relationship between the two countries may be further consolidated. The Japanese Minister is hereby requested to appoint a day to call at the Ministry of Foreign Affairs to make the literary improvement of the text and sign the Agreement as soon as possible. ...read more.