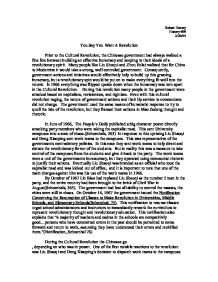 You Say You Want A Revolution.

Robert Henery History 600 2/20/03 You Say You Want A Revolution Prior to the Cultural Revolution, the Chinease government had always walked a fine line between building an effective buracracy and keeping to their ideals of a revolutionary spirit. Many people like Liu Shoqui and Zhou Enlai realized that for China to Modernize it would take a strong, well controled government. Consequently, government actions and intiatives would effectively help to build up this grwoing buracracy, but a revolutionary spin would be put on to make everything fit well into the retoric. In 1966 everything was flipped upside down when the buracracy was torn apart in the Cultural Revolution. ...read more.

This sent University campuses into a state of chaos.(Schoenhals, 363) In response to this uprising Liu Shaoqi and Deng Xiaoping sent work teams to the campuses. This was representative of the governments contradictory policies. In this case they sent work teams to help direct and dictate the revolutionary fervor of the students. But in reality this was a measure to take control of the campuses from the students and give it back to the party. The work teams were a unit of the governments bureaucracy, but they operated using communist rhetoric to justify their actions. Eventually Liu Shaoqi was branded as an official who took the capitalist road and was kicked out of office, and it is important to note that one of the main charges against him was his use of the work teams in 1966. ...read more.

This notification to resume classes urged school administrators and instructors to immediately rework the curriculum to represent revolutionary thought and revolutionary education. This notification also explains that "a majority of teachers and cadres in the schools are comparitivly good...persons who have committed errors in the past should be permitted to come forward and return to work, assuming they have understood their errors and recitified them."(Notification, Schoenhal 76) During the Cultural Revolution the Chinease go , depending on who was in power. One of the first notable reactions to the revolution was Liu Shaoqi and Deng Xiaoping's decision to dispatch work teams to the campuses that were rioting. The work team is a comunist unit used to regulate and dictate action to the masses, to help organize them. So really ...read more.