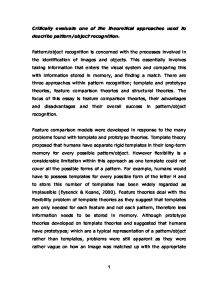 Critically evaluate one of the theoretical approaches used to describe pattern/object recognition. Pattern/object recognition is concerned with the processes involved in the identification of images and objects. This essentially involves taking information that enters the visual system and comparing this with information stored in memory, and finding a match. There are three approaches within pattern recognition; template and prototype theories, feature comparison theories and structural theories. The focus of this essay is feature comparison theories, their advantages and disadvantages and their overall success in pattern/object recognition. Feature comparison models were developed in response to the many problems found with template and prototype theories. Template theory proposed that humans have separate rigid templates in their long-term memory for every possible pattern/object. However flexibility is a considerable limitation within this approach as one template could not cover all the possible forms of a pattern. For example, humans would have to possess templates for every possible form of the letter H and to store this number of templates has been widely regarded as implausible (Eysenck & Keane, 2000). Feature theories deal with the flexibility problem of template theories as they suggest that templates are only needed for each feature and not each pattern, therefore less information needs to be stored in memory. ...read more.

The pandemonium model essentially involves a hierarchical system of demons that perform various information processing tasks that eventually lead to the recognition of an image. The pandemonium model involves several simultaneous stages compared to template models, which only involve two stages and looks image is that .d to respond to a particilat feature.atures, nly involve two stages. at more detail when analysing what the particular pattern/object is. It also has the advantage over template models in that with a limited set of feature detectors it can recognize a potentially infinite number of objects and it will also recognize letters in spite of changes in size, orientation, and other distortions. The pandemonium model also has advantages over earlier theories as it becomes more biologically plausible if one assumes that the demons function rather like neurons. Further support of biological plausibility in feature models was provided by Hubel & Wiesel (1962, in Payne and Wenger, 1998) through their studies of individual cells in the retina and visual cortex. They measured the responses of the individual neurons in the visual cortex to stimuli projected onto the retina of a cat. ...read more.

We do this because we know, based on our vocabulary, that the first word must be THE and not TAE. This shows that knowledge and expectations can direct our perceptions, and explains how we can recognise objects even when some of their major features cannot be seen. This is emphasised by Biederman in his recognition-by-components theory. Biederman, Ju & Clapper (1987 in Eysenck & Keane, 2000) found that even when some of their components were missing, complex objects were still identified. Biederman's theory also improves on feature theories in that it includes spatial descriptions. Feature models are limited as they do not consider the spatial relationships between features and as the same features can produce different patterns, in order to identify an image, in addition to knowing the particular features of it we need to know how these features are presented and connected (Eysenck & Keane, 2000). In conclusion, although feature comparison models do a satisfactory job in explaining how we analyse images for features and match them with images stored in memory, they do not explain how features are combined and recognised thereafter as actual objects in the environment. Although supported by both behavioural and neurological evidence, feature models are limited as they do not account for top-down processes, and at best address only part of the process of pattern/object recognition. 1,085 words. ...read more.