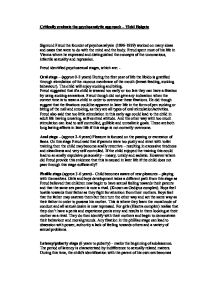 Critically evaluate the psychoanalytic approach - Vicki Holgate Sigmund Freud the founder of psychoanalysis (1896-1939) worked on many ideas and cases that were to do with the mind and the body. Freud spent most of his life in Vienna where he expressed and distinguished the concepts of the unconscious, infantile sexuality and repression. Freud identified psychosexual stages, which are: - Oral stage - (approx 0-2 years) During the first year of life the libido is gratified through stimulation of the mucous membrane of the mouth (breast feeding, sucking behaviour). The child will enjoy sucking and biting. Freud suggested that if a child is weaned too early or too late they can have a fixation by using sucking sensations. Freud though did not give any indication when the correct time is to wean a child in order to overcome these fixations. He did though suggest that the fixations could be apparent in later life in the form of pen sucking or biting of the nail and smoking, as they are all types of oral stimulation/activities. Freud also said that too little stimulation in this early age could lead to the child in adult life having uncaring, self-centred attitude. And the other way with too much stimulation can lead to self controlled, gullible and unrealistic goals. These are both long lasting affects in later life if this stage is not correctly overcome. Anal stage - (approx 2-4 years) Pleasure is focused on the passing or excreaton of faces. ...read more.

This is said to be guilt principle which 'pricks our consciousness' when we do wrong. Freud's' theory of the human mind was a bit like an iceberg - the tip being the conscious mind, the middle section being the Pre conscious, and the bottom section being the Unconscious. The conscious being the part of the mind that we are aware of, the preconscious being memories that are forgotten until we recall them and the unconscious which is the forgotten memories including trauma's that we try to forget for good. Freud published his first book called The Interpretation of Dreams and this went on to be very successful. Freud analysed his own dreams in the first instance and found a way to connect them all to a sexual nature, then went on to say that dreams were always wishful thinking. Freud then went on to analyse his patient's dreams and again he suggested that these dreams were to do with a sexual nature. Freud's over emphasise on sex may be due to the fact that he wrote a t a time of sexual repression. This swaying the way he interpreted the data and information he was provided with. I.e. he was free to apply it in any way he wished. Freud was said to have a messy abstract throughout and put in his own life experiences, fantasies and conflict with his own father (Oedipus Complex). A more general criticism of Freud's theory is its emphasis on sexuality. ...read more.

a concern is that its cultural bias. Freud presumed that the Oedipus complex was a universal phenomenon, but even if true for western cultures, the Oedipus complex may not apply to every culture or to all historical periods. Gr�nbaum (1986) argues that free association is neither free nor validating evidence for psychoanalytic theory. Gr�nbaum (1986) concludes, "I find it unwarranted to use free association to validate causal inferences". He contends that free association is not a valid method of accessing the patients' repressed memories because there is no way of ensuring that the analyst is capable of distinguishing between the patients' actual memories and imagined memories constructed due to the influence of the analyst's leading questions. Grunbaum also criticised Freud's theory of dreams. In spite of Freud's view that this theory represented his greatest insight and success, it has very much failed in the eyes of most of today's critics. Carl Jung (1875-1961) did not agree with Freud in the distinction between manifest and latent content as to Jung dreams had no deliberate disguised meaning but directly reflected the minds current state. A major difference therefore was that where Freud emphasised the dark and destructive nature of the unconscious Jung was influenced on the positive and constructive nature of these influences. Sigmund Freud has had a huge impact on psychoanalytic techniques and most of them are still used today i.e. dream analysis and the talking technique. Without Freud's ideas and findings maybe the world of psychoanalysis would not be where it is today as many theorists have used Freud techniques' as a base for their own modifications and contributions. ...read more.

Response to Question
The essay is extensive in its response to the question. The extent to which the candidate discusses different aspects of the Psychoanalytic approach is somewhat unbalanced - the stages of development are discussed in a high level ...

Response to Question
The essay is extensive in its response to the question. The extent to which the candidate discusses different aspects of the Psychoanalytic approach is somewhat unbalanced - the stages of development are discussed in a high level of detail compared to the levels of the mind or dream analysis. The evaluation of the approach is detailed and to a high standard.

Level of Analysis
The extremely broad nature of the essay means that it would be difficult to examine every facet of the pschoanalytic approach to psychology, but this candidate's effort is commendable. Her discussion of the stages of development and the id, ego and superego is detailed and covers most, if not all of the content for these areas. Some topics are limited in their discussion(levels of the mind, dream analysis) but the major points are included, although development of these areas would improve the essay.

The critical evaluation of the psychoanalytic approach is strong, with the bulk of it coming at the end of the essay, although some is included throughout. Occasionally the candidate poses questions in order to critique the approach - "However where did Freud provide this evidence that this is caused in later life if the child does not pass through this stage sufficiently?" - but fails to make any attempt at answering them, meaning that it has little effect in the essay. The inclusion of GrÃƒÂ¼nbaum, a noted critic of Freud and his theories shows the candidate's knowledge of psychology is of a high standard, and the recognition of Jung, although brief, demonstrates thorough knowledge of the psychoanalytic approach, because the candidate has not limited herself to Freud's work alone. However, this section of the essay could be expanded.

Quality of Writing
Quality of written communication is high, the candidate expresses herself clearly and succinctly. Spelling and grammar are excellent, there are very few errors for such an extended piece of work. Appropriate vocabulary and language are used for GCSE level, and for the subject matter.