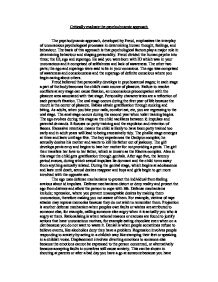 Critically evaluate the psychodynamic approach. The psychodynamic approach, developed by Freud, emphasizes the interplay of unconscious psychological processes in determining human thought, feelings, and behaviour. The basis of this approach is that psychological factors play a major role in determining behaviour and shaping personality. Freud divided the human psyche into three; the ID, ego and superego. He said you were born with ID which was in your unconscious and it comprised of selfishness and lack of awareness. The other two parts; the ego and superego were said to be in your conscious. The ego was comprised of awareness and consciousness and the superego of definite conscious where you begin caring about others. Freud believed that personality develops in psychosexual stages; in each stage a part of the body becomes the child's main source of pleasure. Failure to resolve conflicts at any stage can cause fixation, an unconscious preoccupation with the pleasure area associated with that stage. ...read more.

Defense mechanisms include; repression, where you prevent unacceptable desires by making them unconscious, therefore making you not aware of them. For example, victims of rape attacks may repress memories because they do not wish to remember them. Projection is another defense mechanism when peoples own faults or wishes are attributed to someone else, for example, calling someone else angry when it is actually you who is angry at them. Rationalising is when rational reasons or excuses are found to justify actions that have unconscious motives, for example eating chocolate even when on a diet because you do not want to waste it. Denial is when people sometimes refuse to believe events, like alcoholics deny they have a problem. Regression involves people responding to anxiety by acting in a childish way like stamping their feet or speaking in a childish voice. Displacement involves diverting emotions to someone else because the emotions cannot be expressed to the person concerned, or alternatively because accepting faults in ourselves will cause anxiety. ...read more.

In the theory Freud also suggests that abnormal behaviour is as a result of the parents. Saying this, by taking the responsibility of abnormal behaviour away from the patient, the psychoanalyst is also removing stigma to a certain extent. Freud's theory is also criticized for being based on an unrepresentative sample: his own patients, who were predominantly upper-class Viennese women with mental problems. Freud never examined patients from, or his theory with regard to, other cultures. I think that perhaps past mistakes, if an individual can learn from them, can help improve the future for those with problems in the future. To conclude, I think that Freud's psychodynamic approach does make sense, although it may be explained in other ways, and does explain a lot about a person's personality and habits and why they have these certain traits. Even though Freud was known as being a bit too over the top and eccentric with his ideas and theories, they do make great sense and are of great use to finding out about a certain person's personality and why they are like the way they are. It can be useful in further research. ...read more.