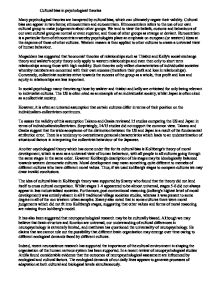 Cultural bias in psychological theories Many psychological theories are hampered by cultural bias, which can ultimately negate their validity. Cultural bias can appear in two forms; ethnocentrism and eurocentrism. Ethncocentrism refers to the use of our own cultural group to make judgements about other groups. We tend to view the beliefs, customs and behaviours of our own cultural group as normal or even superior, and those of other groups as strange or deviant. Eurocentrism is a particular form of ethnocentrism wereby psychologists place an emphasis on european (or western) ideas at the expense of those of other cultures. Western researc is then applied to other cultures to create a universal view of human behaviour. Mogaddam has suggested that 'economic' theories of relationships such as Thiabut and Kelly's social exchange theory and walster's equity theory only apply to western relationships and even then only to short term relationships among those with high mobility. ...read more.

To assess the validity of this assumption Takano and Osaka reviewed 15 studies comparing the US and Japan in terms of individualism/collectivism. Surprisingly, 14/15 studies did not support the common view. Takano and Osaka suggest that the wide acceptance of the distinction between the US and Japan is a result of the fundamental attribution error. There is a tendency to overestimate personal characteristics which leads to an underestimation of situational factors in interpreting the collectivist behaviour of the Japanese. Another osychological theory which has come under fire for its cultural bias is Kolhbergs's theory of moral development, which is seen as a universal view of human behaviour, with all people in all cultures going through the same stages in the same order. However Kohlberg's description of his stages may be ideologically balanced towards western democratic cultures. ...read more.

It has also been suggested that neuropsychological research may be be culturally biased. Although we may believe that brain structure and function are universal, our understanding of cultural differences in neuropsychology is extremely limited, and matthews has questioned the universality of neuropsychology. He claims that we cannot rule out the possibility that different brain organisation may emerge over time owing to different ecological demands faced by different cultures. Indeed, recent neuroscience research has supported the importance of the cultural environment in shaping the organisation of the human nervous system has been supported. In a recent review of neuopsychological studies Ardila found considerable evidence that the outcomes of neuropsychological assessment are influenced by ecological and cultural factors. The ecological demands of our daily lives appears to generate processes of adaptation at both cultural and biological levels simultaneously. ...read more.

This is a response to a Psychology-based question on cultural bias on psychological theories. In it, the candidate retain an excellent focus on the question and ties all their analytical point back to why the theories they're analysing might be ...

This is a response to a Psychology-based question on cultural bias on psychological theories. In it, the candidate retain an excellent focus on the question and ties all their analytical point back to why the theories they're analysing might be considering ethnocentric/Eurocentric. I would have liked to see a more balanced argument, with possibly more emphasis on the number of cross-cultural replication Kohlberg conducted in informing his theories of Moral Development, rather than focusing more on the studies and theories that refute his evidence, as this would make the balance more obvious. Other than that, this is a model answer.

The Level of Analysis is here is very good, and is exactly what the exam board are asking for; approached with a sound understanding of appropriate terminology and essay structure, this answer is entirely representative of an A grade candidate. In it, the candidate displays a sound level of both knowledge and understand not only of the theories that show cultural bias, but also the studies that provided the empirical evidence for the support of those theories. As well as this, there is a well-established ability to objectively evaluate the strength and validity of these psychological theories with a direct focus on the ways in which cultural bias lowered their external validity. I like the amount of specialist terminology used like "ethnocentric", "neuropsycholgical" and "individualist/collectivist continuum" as this shows a very deep level of understanding of the often quite challenging jargon that personifies psychological theory. I would've liked to have seen more balance though, as all psychological question require some sort of appreciation of counter-argument/theories, and as it is unlikely that someone like Kohlberg would make such fleeting generalisation, to suggest that he did not at least consider cultural bias is the only thing preventing this candidate from achieving an A* grade.

The Quality of Written Communication (QWC) is fair. There are many typing errors that a simple spell-check could iron out, but none that compromise what the candidate is trying to say in their answer. Still, there should be a recognition of the software available to ensure QWC is accurate. Spell-checkers are free and available from many places on the internet - some serves like Google Chrome and Safari have them built in.