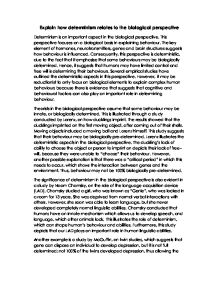 Determinism in the biological perspective

Lorenz illustrates the deterministic aspects in the biological perspective. The duckling's lack of ability to choose the object or person to imprint on depicts their lack of free-will, because they were unable to "choose" their behaviour. However, another possible explanation is that there was a "critical period" in which this needs to occur, which shows the interaction between genes and the environment. Thus, behaviour may not be 100% biologically pre-determined. The significance of determinism in the biological perspective is also evident in a study by Noam Chomsky, on the role of the language acquisition device (LAD). Chomsky studied a girl, who was known as "Genie", who was locked in a room for 13 years. ...read more.

but it is not full determined; not 100% of the twins developed depression, thus allowing the possibility that environmental, and possibly cognitive, factor that can influence behaviour. Thus, the study by Lorenz and Chomsky outlines the deterministic elements in the biological perspective. It suggests that behaviour may be pre-determined, but not 100%, where biological factors, such as innate mechanisms (the LAD) plat an important role in influencing human behaviour. Hence, determinism is an important aspect related to the biological perspective. However, there may also be a role for the interaction between the individual and the environment and cognitive aspects which could influence behaviour, as shown by Chomsky's study on "Genie" and McGuffin's study on twins with depression. ?? ?? ?? ?? ...read more.

This is an excellent essay. It is very succinct and to-the-point, very rarely writing anything that does not directly score marks/is unrelated to the question. The candidate provides a good indication of their understanding of both determinism, the biological approach, ...

This is an excellent essay. It is very succinct and to-the-point, very rarely writing anything that does not directly score marks/is unrelated to the question. The candidate provides a good indication of their understanding of both determinism, the biological approach, and the role of determinism in explaining behaviour through biological means. The evaluation shown is balanced and provide two studies supporting of the presence of determinism in biological studies and two that prove that biology does not 100% determine behaviour. A little more clarity could be useful here, as many of the studies are outlined in brief and those unfamiliar with them may not fully understand the theories behind them, such as in McGuffin's study, where it should be made clear the use of a sample of monozygotic twins, rather than dizygotic or a mixture of both.

The Level of Analysis is prescriptive and may comes across regimented, but this really is the best way to convey all the necessary information the question requires. The discussion about the empirical evidence for and against determinism in the biological approach is balanced and makes a good argument that uses it's psychological studies well. As stated earlier, some extra background to some of the studies could be useful, and the links to determinism must be made very clear, as there are marks for establishing the relevance of studies in accordance with the question. For example, Chomsky's case study on "Genie" could also be analysed for cognitive individual differences, and so them this study would have to be linked in a different way to a different aspect of psychology.

The Quality of Written Communication here is very good. All signs indicate a candidate who is proficient and writes with a good level of understanding of a wide variety of psychological terminology. This shows the examiner a comfortability with the language of the professionals and is a great way of making your essay sound more confident. From an English perspective, there is no cause for concern with regards to spelling, grammar or punctuation.