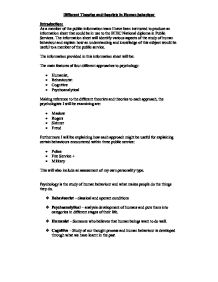 Different Theories and theorists in Human behaviour Introduction: As a member of the public information team I have been instructed to produce an information sheet that could be in use to the BTEC National diploma in Public Services. The information sheet will identify various aspects of the study of human behaviour and explain how an understanding and knowledge of this subject would be useful to a member of the public service. The information provided in this information sheet will be: The main features of four different approaches to psychology: * Humanist, * Behaviourist * Cognitive * Psychoanalytical Making reference to the different theorists and theories to each approach, the psychologists I will be examining are: * Maslow * Rogers * Skinner * Freud Furthermore I will be explaining how each approach might be useful for explaining certain behaviours encountered within three public service: * Police * Fire Service + * Military This will also include an assessment of my own personality type. Psychology is the study of human behaviour and what makes people do the things they do. * Behaviourist - classical and operant conditions * Psychoanalytical - analysis development of humans and puts them into categories in different stages of their life. * Humanist - Someone who believes that human beings want to do well. * Cognitive - Study of our thought process and human behaviour is developed through what we have learnt in the past Abraham Maslow is recognized for establishing the theory of a hierarchy of needs, he believed that human beings are encouraged by unfulfilled needs, and the certain lower needs being to be fulfilled before higher needs can be satisfied. This basically meaning that he believed you can't go up a step without the step before. Maslow examined excellent people such as Albert Einstein, Jane Addams, Eleanor Roosevelt and Frederick Douglas rather than study the mentally ill people or neurotic people. ...read more.

Skinner expressed no interest in understanding the human psyche. Skinner was only determined to see how behaviour is caused by external force. Skinner believed that everything we do as humans is shaped by our experiences of punishment and reward. B.F.Skinner died of leukaemia after becoming the most celebrated psychologist since Sigmund Freud. Sigmund Freud was born in the Austro-Hungarian Empire in 1856. His father was a small time merchant, and Freud's mother was his second wife. Freud had two half-brothers who were 20years older than him. His family moved to Vienna when he was four years old, and though he often claimed he hated the city, he lived there until it was occupied by Germany in 1938. Freud's family background was Jewish, though his father was a freethinker and Freud himself an avowed atheist. Freud was an ambitious student who studied medicine and law were. He was interested in science above all; the idea of practicing medicine. He hoped to go into neurophysiologic research, but research was hard to manage in those days unless you were independently rich. Freud was engaged and needed to be able to support a family before he could marry, so he was determined to go into private practice with a specialty in neurology. During his training he befriended Josef Breuer, another physician and physiologist. Freud's patient Anna O was a young women suffering from what was then called hysteria. She was temporally paralysed and could not speak Native American but could speak French and English, she couldn't drink when she was thirsty nor eat when she was hungry, Breuer discovered that if he hypnotized her she would talk of things she couldn't remember when she was conscience, and afterwards her symptoms were relieved, therefore it was called "the talking cure." Freud went to Paris for further study under Jean-Martin Charcot, a neurologist known all over Europe for his studies of hysterics and use of hypnosis. ...read more.

Freud was a psychoanalytical psychologist, he analysed the difference between humans and put them into categories in different stages of their lives. To put his theory to the police, fire and army it would be: Ego - To learn. The army learn things in training to survive; if they were to leave the army they would know how to cope in life as they have learnt the basic knowledge of life through the army. Police have learnt how to solve crime. Fire service have learnt how to protect themselves from danger, if an incident was to happen that was a danger to the public the fire service would know how to deal with it. Super Ego- To learn from their mistakes. In the fire, police or army once they have passed their training, the only way to learn more is to learn by the mistakes they make as they go along and putting them into practise. Fire service - they learn to put out fires, when a fire occurs they are putting into practise what they have learnt. The police, learn to solve crimes, when a crime is committed they go out and put what they have learnt into practise by dealing with the incident. Army, learn to go into battle and help civilians, when a war is on they are putting into practise what they have learnt etc. Assessment of my own personality type As part of my own personality type I am a Company worker my typical features are conservative, dutiful and predictable. My positive qualities are organising ability, practical, common sense, hard working and self discipline. My allowable weaknesses are lack of flexibility and unresponsiveness to unproven ideas. This is tested on a self-perception inventory test I done, each area of the test I had to put a number at what I felt was my strongest point and my weakest point, the higher the number the stronger my point was the lowest number the weakest are of my point. Each area could only equal up to ten. See attached information sheet for more. ...read more.