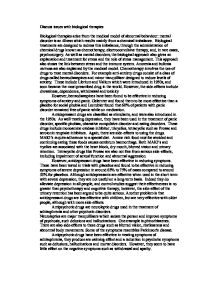 Discuss issues with biological therapies Biological therapies arise from the medical model of abnormal behaviour: mental disorder is an illness which results mainly from a chemical imbalance. Biological treatments are designed to redress this imbalance, through the administration of chemical drugs known as chemotherapy, electroconvulsive therapy, and, in rare cases, psychosurgery. As well as mental disorders, the biological approach also gives an explanation and treatment for stress and the role of stress management. This approach also shows the link between stress and the immune system. Anorexia and bulimia nervosa are also explained by the medical model. Chemotherapy involves the use of drugs to treat mental disorders. For example anti-anxiety drugs consist of a class of drugs called benzodiazepines and minor tranquilliser designed to reduce levels of anxiety. These include Librium and Valium which were introduced in 1950s, and soon became the most prescribed drug in the world. However, the side-effects include drowsiness, dependence, withdrawal and toxicity However, benzodiazepines have been found to be effective in reducing symptoms of anxiety and panic. Gelernter and found them to be more effective than a placebo for social phobia and Lecrubier found that 60% of patients with panic disorder remained free of panic while on medication. Antidepressant drugs are classified as stimulants, and were also introduced in the 1950s. ...read more.

One is the development of symptoms similar to those found in Parkinson's disease, such as stiffness, immobility and tremors. It is thought that a phenothiazenes destroy a part of the brain. On the whole, the effectiveness of chemotherapy has been backed up by Heimberg who compared the MAIO drug with cognitive behavioural therapy in the treatment of social phobia. Some participants received 12 weeks treatment of either the antidepressant or a placebo. Others received 12 weeks of CBT and educational supportive group therapy (a placebo equivalent of CBT). At the end of the 12 weeks, the MAIO and CBT treatments were more effective, in terms of response rate and other measures then, their placebo counter parts. Whilst MAOI therapy was more affected than CBT on some measures, the fact that both were superior to the respective placebos indicate that they are useful in the treatment of social phobia. However, the major problem with chemotherapy, is that it treats the symptoms and not the cause. It has now become clear that drugs do not necessarily far long-term cure, because in many cases symptoms reoccur when the drugs are no longer taken ECT was originally used to treat schizophrenia, but today it is primarily used to treat severe depression, bipolar disorder and certain obsessive-compulsive disorders. ...read more.

Also, this approach takes the nature view where those aspects of behaviour are inherited. Nature does not simply refer to ability is present at birth, but to any ability determined by genes, including those that appear to maturation. This approach ignores any nurture affects in that aspect of behaviour could be acquired through experience i.e. learned from interactions with the physical and social environment. The biological port also tends to show reductionism. This is the act of breaking complex phenomena down into more simple components. There are ethical issues to address in biological therapies. The biological model of mental disorders removes responsibility from the patient and places it on faulty functioning of the body. With respect to ethics, this means that no blame is attached to the individual, but on the negative side, it means that the patient is not empowered to help him or herself. All responsibility is taken away and placed in the hands of the health professionals. There is also all the ethical issues that the patient may feel that is it the condition that is being treated rather then them as the individual. They may feel that they are being dismissed with a packet of pills, with no real consideration given for the intense misery they are experiencing. As well at the biological approach, there are many other more approaches, which can be used to treat mental disorders such as the cognitive approach, behavioural approach and psychodynamic approach. ...read more.

This essay orientates itself around the issues both ethical and practical, with biological treatments for psychological disorders. The candidate has successfully addressed a wide variety of biological treatment therapies and drawn on an appropriate selection of evidence in the form ...

The Level of Analysis here is exceptional. A high quality of appropriate knowledge has been presented in this essay with the use of field-specific terminology and an adept use of language to convey the candidates' points clearly and with effective insight. There is an excellent introductory paragraph about the definition and explanation of biological treatments and which are the most common, as well as how biological psychologists might view psychological disorders and thus how they might treat them (drug therapy, electroconvulsive therapy, etc. in order to change the biology of the sufferers). There is an in-depth discussion about the issues of ethics (mental and physical harm/right to withdraw) of treatments like ECT and how drug treatment may be seen as practically difficult due to the stigma of being reliant on drugs and the possible side-effects of regularly taking medication (side-effects may cause the patients to stop adhering to prescribed regimens - this could've been made more explicit). The candidate could've also mentioned, if they wished to strengthen their answer further, that addiction is a problem for drug issues, and thus possibly prolonging the belief that the patient requires the treatment.

The Quality of Written Communication here is excellent. There is a successful handling of many tricky punctuation points and an accurate spelling of very specific psychological lexis.