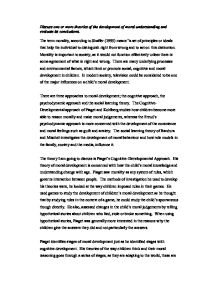 Discuss one or more theories of the development of moral understanding and evaluate its conclusions.

The term morality, according to Shaffer (1993) means “a set of principles or ideals that help the individual to distinguish right from wrong and to act on this distinction.  Morality is important to society, as it would not function effectively unless there is some agreement of what is right and wrong.  There are many underlying processes and environmental factors, which limit or promote social, cognitive and moral development in children.  In modern society, television could be considered to be one of the major influences on a child’s moral development.

There are three approaches to moral development; the cognitive approach, the psychodynamic approach and the social learning theory.  The Cognitive-Developmental approach of Piaget and Kohlberg studies how children become more able to reason morally and make moral judgements, whereas the Freud’s psychodynamic approach is more concerned with the development of the conscience and moral feelings such as guilt and anxiety.  The social learning theory of Bandura and Mischel investigates the development of moral behaviour and how role models in the family, society and the media, influence it.

The theory I am going to discuss is Piaget’s Cognitive-Developmental Approach.  His theory of moral development is concerned with how the child’s moral knowledge and understanding change with age.  Piaget saw morality as any system of rules, which governs interaction between people.  The methods of investigation he used to develop his theories were, he looked at the way children imposed rules in their games.  He used games to study the development of children’s moral development as he thought that by studying rules in the context of a game, he could study the child’s spontaneous though directly.  He also, assessed changes in the child’s moral judgements by telling hypothetical stories about children who lied, stole or broke something.  When using hypothetical stories, Piaget was generally more interested in the reasons why the children give the answers they did and not particularly the answers.

Piaget identifies stages of moral development just as he identified stages with cognitive development.  His theories of the way children think and their moral reasoning goes through a series of stages, as they are adapting to the world, these are also known as the processes of accommodation and assimilation.  He believed that as children’s reasoning about the world changes when they grow older and gain more experience, so does their reasoning about morality.  Their ability to think about the world in more complex ways is what causes them to move on from one stage to the next.  This is known as cognitive development.

Piaget stated that infants don’t understand much about morality until they are about three or four years of age.  Their development divides into two main stages after infancy.  His stages of moral development are:

Pre Moral Stage (up to three or four years)

Children don’t understand about rules, and so they don’t make moral judgements

Children at this stage think rules are absolute and unchangeable, and the goodness and badness of an action is judged largely on the basis of its consequences rather than by taking intent into account.

Stage of Autonomous Morality (from around six or seven)

Children at this stage now see rules as more changeable and intentions are taken into account.  Children also start to believe that it is possible to break rules and get away with it, whereas earlier they tended to think they will always be found out and possibly punished.

Researchers from Europe  and America have tested some of Piaget’s theories and have concluded that distinct stages of development do seem to exist however, other research found that children do not see all rules as being equally important as Piaget thought they did.

Heteronomous Morality, also known as moral realism, means when the child is subject to another’s laws or rules.  Children think that rules must be obeyed no matter what the circumstances.  A child at this stage will think that rules are only made by authority figures, such as, parents and teachers.  Two other features that are displayed in moral reasoning at this stage are, first they expect bad behaviour to be punished in some way, they believe that the punishment should be expiatory – the wrongdoer must make amends for the crime by paying with some kind of suffering.  They have the view that the amount of punishment should match the badness of the behaviour. Secondly, if the bad behaviour goes undetected then the child believes in immanent justice – where any misfortune occurring after the bad behaviour can be seen as a punishment.  For example, if a child tells a lie and gets away with it, then later trips and falls, the younger child could consider this as a punishment.  In general, they believe punishment should be fair and that wrongdoing will always be punished in some way.

Autonomous Morality, which means when the child is subject to one’s own laws and rules.  It involves moral relativism whereby the child comes to realise that rules evolve from social relationships.  Due to the child ‘decentring’ and their developed ability to think more flexibly about moral issues, they have began to realise it is important to take other people’s opinions into account.  At this stage a child will have developed the understanding that sometimes rules of morality can be broken in certain reasonable circumstances.  They believe in reciprocal punishment, whereby the punishment should fit the crime.  For example, if a child takes another child’s sweets, the first child should be deprived of their sweets or should make it up to the victim in some other way.  This is known as the principle of reciprocity.  Children will also have learnt at this stage that wrongdoers often avoid punishment, diminishing any belief in immanent justice.  They see punishment as a method of making the offender understand the nature of the crime and that punishment is also a deterrent.

The move from heteronomous morality to autonomous morality is influenced by two factors.  Children around the age of seven begin to move on from the pre operational stage of an illogical and an egocentric way of thinking to more logical and flexible way of thinking, in the operational stage.  Their growing awareness that other people have different views allows them to develop more mature moral reasoning.  However, moral development lags at least one to two years behind cognitive development because the whole process depends on the cognitive changes occurring first.

Kohlberg expanded Piaget's theory to form a theory that also explained the development of moral reasoning. While Piaget described a two-stage process of moral development, Kohlberg’s theory outlined six stages within three different levels. Kohlberg extended Piaget’s theory, proposing that moral development is a continual process that occurs throughout the lifespan.  A study by Colby et al (1983) criticised Piaget’s assumption that children of ten and eleven years old had reached an adult level of moral reasoning.

Piaget was always focusing on what an average child was capable of achieving so he neglected the idea of great variations between the individual child’s ways of thinking.

In general, Piaget’s cognitive theory has been criticised for the methods of investigation not being as precise as they could have been.  Methods he used were seen as complicated, leading critics to think he under estimated younger children’s capabilities of what they could and could not do.  This was because later research went on to conclude that children could actually take other motives into consideration, when they understood what motives were involved.

Despite criticism, Piaget’s work is still regarded as a revolutionary step forward in the way we understand how children think.  It has led to a much more realistic ways of understanding children’s moral development.  Many attempts to test Piaget’s theories from researchers around the world have resulted in acceptance that some of his views and methods do appear to exist.

The Response to the Question here is extensive, and covers a vast array of information pertaining to the proposed question. The candidate shows knowledge of many different theories of moral development and has extensively elaborated on that of the revolutionary ...

The Response to the Question here is extensive, and covers a vast array of information pertaining to the proposed question. The candidate shows knowledge of many different theories of moral development and has extensively elaborated on that of the revolutionary Psychologist Piaget. Identifying correctly the beliefs of his method, the candidate shows a sound appreciation of his theory and reasoning behind it. But what the examiners would've liked to have seen more of in this answer is the use of counter-arguments structured throughout the answer, relating to the points made at certain points during the answer e.g. - when the candidate comments on how Piaget studied children's creation of rules when playing a simple game, the candidate could take their comments on how "some research" (which should be named and cited) refutes his belief that children operated at a much higher level of morality than he first thought.

The Level of Analysis shown here is very good. The candidate has demonstrated an extremely in-depth understanding of at least one moral development theory, and has mentioned - fortifying their answer with extra information (examiners love this) - a number of other beliefs about child development. It is especially nice to see plenty of counter-arguments made against Piaget because it shows the candidate has considered the reality of his theory and those psychologists who have called to question the validity of Piaget's assumptions about child intelligence and thinking ability, though with regards to this answer, it could be said that these counter-arguments should not be lumped towards the end of the essay, as it finishes on a rather pessimistic note otherwise.
Where the candidate could also improve is their use of external research. Examiners like to see that the candidates show a strong enthusiasm for their coursework and have conducted external, independent research instilled throughout their response, showing that the candidate has addressed a number of professional sources in order to greatly enhance the strength and validity of their answer with the use of facts from further psychological research into the areas of interest e.g. - the study by which Kohlberg founded his Six-Stage Theory of Moral Development and his article summary (that all psychologists have to write when conducting psychological research). This is just one example, and sometimes such files are accessible without permission, so the candidates should hunt around for good sources - even a simple quote can improve the answer, like this candidate's reference to Schaffer's definition of morality at the start of their coursework.

The Quality of Written Communication (QWC) is fine. There are moments - quite abundant in place, actually - where it seems the grammatical standard has slipped. In an exam this is more acceptable due to time constraints and writing pressure, though with coursework, where many drafts and re-drafts are permitted over a long period of time, grammatical/spelling errors like - "It has led to a much more realistic ways of understanding childrenÃ¢â‚¬â„¢s moral development" should not be seen as coursework should be read through for these reasons. Other than that though, the candidate's QWC mark remains quite high.