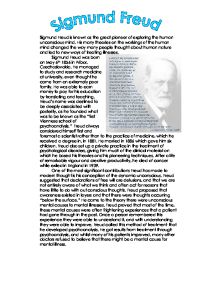 Explore the work of Sigmund Freud

Sigmund Freud is known as the great pioneer of exploring the human unconscious mind. His many theories on the workings of the human mind changed the way many people thought about human nature and led to new ways of treating illnesses. Sigmund Freud was born on May 6th 1856 in Pribor, Czechoslovakia. He managed to study and research medicine at university, even thought he came from an extremely poor family. He was able to earn money to pay for his education by translating and teaching. Freud's name was destined to be deeply associated with posterity, as he founded what was to be known as the "first Viennese school of psychoanalysis." Freud always considered himself first and foremost a scientist rather than to the practice of medicine, which he received a degree in, in 1881. He married in 1886 which gave him six children. Freud also set up a private practice in the treatment of psychological disorders, giving him much of the clinical material on which he based his theories and his pioneering techniques. After a life of remarkable vigour and creative productivity, he died of cancer while exiled in England in 1939. One of the most significant contributions Freud has made to modern thought is his conception of the dynamic unconscious. Freud suggested that declarations of free will are delusions, and that we are not entirely aware of what we think and often act for reasons that have little to do with out conscious thoughts. ...read more.

He was able to help patients remember their past experiences. Unfortunately, Freud found that despite a subject's every effort to remember, a certain resistance kept him from the most painful and important memories. He eventually came to understand that certain items were completely repressed, and off-limits to the conscious realm of the mind. Freud's eventual practice of psychoanalysis focused not so much on the recall of these memories as on the internal mental conflicts which kept them buried deep within the mind. Sigmund Freud's most famous work was The Interpretation of Dreams, published in 1899. Freud was fully aware of the importance of dreams and described them as the 'royal road' to understanding the unconscious. According to Freud, dreams are spy-holes into out unconsciousness. Fears, desires and emotions that we are usually unaware of make themselves known through dreams. To Freud dreams were fundamentally about wish-fulfilment. Even negative dreams are a form of wish-fulfilment; the wish being that certain events do not occur. Very often such dreams are interpreted as a warning. Freud believed that although our dreams contain these important messages, they are encoded and disguised. The unconscious mind does not speak any verbal language therefore it must communicate via symbols. Freud then distinguished between the "manifest content" of dreams and the "latent content" of dreams. Manifest dreams are what we actually dream, and latent dreams are the unfulfilled wish that the dream represents. ...read more.

A similar internal conflict arises in the young girl, which is resolved after regarding her father as an inappropriate love object and ultimately identifying with her mother. These examples of Freud's psychoanalytic theory demonstrate the idea that aggression is an innate personality characteristic common to all humans and that behaviour is motivated by sex drives. According to Freud, aggression in children is instinctual and should be resolved in adulthood. Therefore, over the course of development, after a child had rejected the opposite sex parent, he or she will enter a period of latency in which they commonly reject all boys or all girls. Once puberty is reached, attention shifts to the genital region as an area of pleasure. Freud asserted that once this stage is reached, both men and women would search for an appropriate member of the opposite sex to fulfil sexual urge. Thus, Freud states that in individuals where the childhood conflicts have been successfully resolved, all aggression has been removed by adulthood in the pattern of development. As you can see, Sigmund Freud was an extremely important psychologist and has developed the science of psychoanalysis greatly, covering so many aspects of human life. Many of his treatments and theories are used today in our society, such as free association and couch-psychoanalysis, to help cure mental disorders and illnesses. Not only has Freud's work influenced the fields of psychiatry and psychology, but it has also had an impact on other areas such as art and literature. ...read more.