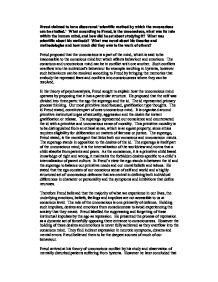 Freud claimed to have discovered 'scientific method by which the unconscious can be studied.' What according to Freud, is the unconscious, what was its role within the human mind, and how did he set about studying it? What was scientific about his metho

Freud claimed to have discovered 'scientific method by which the unconscious can be studied.' What according to Freud, is the unconscious, what was its role within the human mind, and how did he set about studying it? What was scientific about his methods? What was novel about his theories and methodologies and how much did they owe to the work of others? Freud proposed that the unconscious is a part of the mind, which is said to be inaccessible to the conscious mind but which affects behaviour and emotions. The conscious and unconscious mind can be in conflict with one another. Such conflicts overflow into the individual's behaviour for example resulting in hysteria, however such behaviours can be resolved according to Freud by bringing the memories that embody the repressed fears and conflicts into consciousness where they can be resolved. In his theory of psychoanalysis, Freud sought to explain how the unconscious mind operates by proposing that it has a particular structure. He proposed that the self was divided into three parts: the ego the superego and the id. The id represented primary process thinking. Our most primitive need focused, gratification type thoughts. The id Freud stated, constitutes part of ones unconscious mind. It is organised around primitive instinctual urges of sexuality, aggression and the desire for instant gratification or release. The superego represented our conscience and counteracted the id with a primitive and unconscious sense of morality. ...read more.

Freud also analysed symbolism within dreams, in which some wishes can find expression in various displaced forms. Freud's propositions of the unconscious to the field of psychology derived from his study of patients at his medical practice. Freud developed what he called the 'talking cure' in which the patient would recall anything that came to mind, Freud meticulously recorded everything spoken and later analysed and interpreted the unconscious meaning of what was said. Freud regarded the talk of his patients as scientific data and the analytic session as a scientifically valid method of investigation. Freud intended psychoanalytic psychology to be a science and he desired to make a way for psychoanalysis to be accepted as such within the field of psychology. For Freud successful therapy was not an end in itself but continued evidence that psychoanalytic theory was true. Through his research Freud aimed to reveal physical processes as quantitative determinate states of specifiable material particles. On the surface Freud's theory had the appearance of being strongly scientific. It has the capacity to accommodate and explain every possible form of human behaviour. However, it is precisely this factor, which has been used strongly to undermine its claim to scientific status. Karl Popper developed a criterion based on the notion that every genuine scientific theory must be testable and therefore falsifiable at least in principle. Therefore if a theory is incompatible with possible observations it is scientific, but if a theory is compatible with all possible observations it is not scientific. ...read more.

He knew from his study with Brentano that many predecessors - going back at least to Leibniz with his 'minute perceptions' had already postulated the existence of unconscious psychological existence. However Freud did break new ground by hypothesising specific rules for the unconscious, describing it as a lawful phenomenon. Thus his development of the concept of there being a primary process as an unconscious mode of thought characterised by displacement, was an important milestone in the history of dynamic psychology. Through Freud's life there were also important role models who inspired Freud and further those who worked along side him. In the investigation of Hysteria during the earlier days of Freud's career, a physician named Josef Breuer collaborated with Freud in developing the idea that hysterical symptoms derive from emotionally charged memories that need to be recovered. This work formed the basis of Freud's latter proposition of the unconscious and its role within the mind. In final conclusion Freud's views in relation to the unconscious mind constitute a lifetime of work by Freud himself developed and build upon concepts already in existence, for example the work of Leibniz. Freud's theories have come under serious criticism since there proposal especially debating their scientific validity, however there is no doubt that they have influenced many theories and ideas that have been presented since. Freud showed the kinds of questions that must be answered before any psychologist can claim to have a full theory of human personality, influencing the progression of the field of psychology drastically. ...read more.

Response to Question
This coursework question has four different aspects which must be addressed in the answer in order to gain high marks. The response is extensive, describing the tripartite theory, before discussing Freud's methods and then critiquing it along ...

Response to Question
This coursework question has four different aspects which must be addressed in the answer in order to gain high marks. The response is extensive, describing the tripartite theory, before discussing Freud's methods and then critiquing it along the lines that the question specifies. The candidate's use of a bibliography to reference his/her sources demonstrates that research has been undertaken, indicating that this is a strong candidate.

Level of Analysis
The level of analysis is excellent in this essay, without being verbose or bombastic. The candidate discusses the areas of the question in turn and gives an appropriate level of attention to each. The citation of other studies and criticism of Freud's work to lend support or to expand the candidate's points shows that wider reading on the subject has been completed and that the candidate has the initiative to go beyond what is required by the essay. The candidate's consideration of the strengths and weaknesses of Freud's work before making a balanced judgement, based on the evidence they have provided and discussed in the main body of their essay also shows a high level of work.

Quality of Writing
The candidate's quality of writing is generally excellent, but the start of the second paragraph, on the tripartite theory, does not flow together, with lots of short sentences and some misplaced or missing punctuation. As this is a piece of coursework, this should have been rewritten, as there is an opportunity to redraft. However, this is not a significant issue and would not likely affect the candidate's grade. The candidate's spelling is excellent, with relevant and specific terms used correctly, showing an understand of psychology and pyschological vocabulary.