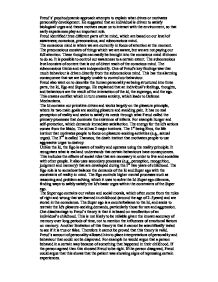 Freud's' psychodynamic approach attempts to explain what drives or motivates personality development. He suggested that an individual is driven to satisfy biological urges and theses motives cause us to interact with the environment, so that early experiences play an important role. Freud identified three different parts of the mind, which are based on our level of awareness; conscious, preconscious, and subconscious mind. The conscious mind is where we are currently in focus of attention at the moment. The preconscious consists of things which we are aware, but we are not paying our full attention. These thoughts can easily be brought into the conscious mind if chosen to do so. It is possible to control our awareness to a certain extent. ...read more.

It has no real perception of reality and seeks to satisfy its needs through what Freud called the primary processes that dominate the existence of infants. For example hunger and self-protection, which demands immediate satisfaction. The energy for the Id's actions comes from the libido. The id has 2 major instincts. The 1st being Eros, the life instinct that motivates people to focus on pleasure-seeking activities (e.g., sexual urges). The 2nd is called Thanatos, the death instinct that motivates people to use aggressive urges to destroy. Unlike the Id, the Ego is aware of reality and operates using the reality principle. It recognizes what is real and understands that certain behaviours have consequences. This includes the effects of social rules that are necessary in order to live and socialize with other people. ...read more.

One disadvantage to Freud's theory is that it is based on recollection of an individual's childhood. This is not likely to be reliable given the known accuracy of memory over long periods of time, not to mention the influences of emotional factors on memory. Another limitation of this theory is that it cannot be scientifically tested to see if it is true or false. Therefore it cannot be proved that this theory is valid. Freud's account of personality allowed him to place interpretations of personality and behaviour that could not be disproved. For example he would argue that a person behaved in a certain way because of something that happened in their childhood. If the person agreed then this showed Freud to be right. If the person disagreed, Freud could argue that this shows that the patient was showing signs of repressing certain experiences. ...read more.

Overall, this is an excellent essay. It takes a complex theory and explains it clearly. There are well made criticisms in the last paragraph. The only thing it needs is a final sentence to draw a conclusion about how influential and useful Freud's theory has been. For a GCSE essay, this gets 5 stars.