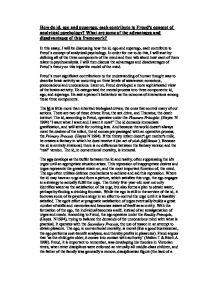 How do id, ego and superego, each contribute to Freud's concept of analytical psychology? What are some of the advantages and disadvantages of this framework?

How do id, ego and superego, each contribute to Freud's concept of analytical psychology? What are some of the advantages and disadvantages of this framework? In this essay, I will be discussing how the id, ego and superego, each contribute to Freud's concept of analytical psychology. In order for me to do this, I will start by defining all of the three components of the mind and then talk about how each of them relate to psychoanalysis. I will then discuss the advantages and disadvantages of Freud's theory on this tripartite model of the mind. Freud's most significant contributions to the understanding of human thought was to describe brain activity as occurring on three levels of awareness: conscious, preconscious and unconscious. Later on, Freud developed a more sophisticated view of the brains activity. He categorized the mental process into three components: id, ego, and superego. He saw a person's behaviour as the outcome of interactions among these three components. The id is little more than inherited biological drives, the ones that control many of our actions. There are two of these drives: Eros, the sex drive, and Thanatos, the death instinct. The id, according to Freud, operates under the Pleasure Principle: (Hayes. N 1994) "I want what I want and I want it now!" ...read more.

I will now discuss the advantages and the disadvantages of his fame work. There are several weaknesses to psychoanalytic theory. The development of personality are not really susceptible to normal psychological evaluation, since what is considered to count as evidence is so very different from the normal empirical evidence required in psychology. Freud also believed also believed that the different aspects of personality had distinct 'biological origins', and that it was only a matter of time before physiological research would reveal the physiological substrates of the id, ego and superego. One hundred years later this picture looks rather different While not biologically sound, Freud's explanation of the workings of the mind is revolutionary. In one rather simplistic topographical model, he was able to develop a theoretical assumption of the intangible human mind. Through his research, Freud concluded, "all psychological events are tied to energy, drive, and instincts based on biological characteristics" (Muss. R. 1996, P.18). While I agree that unconscious thoughts do play a major role in decision-making process, I do not believe they are the sole source of motivation. Instinctual actions generally come to the forefront in a moment of crisis or emergency, when a quick, gut reaction is needed. In everyday decisions, however, I believe that an instinctual reaction is used as a decision-making tool to aid a person in logical reasoning. ...read more.

It has also been frequently noted (by behaviorists, as well as others) that those who adopt Freud's intrapsychic focus tend to pay insufficient attention to environmental factors as contributors to various disorders. Inadequate consideration of the role reinforces in maintaining behaviors, or of the roles of social conditions such as discrimination, disturbed family relationships and occupational stressors, may result in the inappropriate treatment of patients. According to Sandler. J, the structural model of the third phase provided the basis for so-called classical psychoanalytic thinking for many years after Freud' death in 1939, as reflected in the works ego psychologists Hartmann, Kris, and Lowenstein, and in the developmental psychoanalysis of Anna Freud. To a significant extent it is still a major influence on psychoanalytic conceptualizations, although there are indications that nowadays its suitability as the psychoanalytic theory of the mind is being increasingly questioned. The Ego and the Id has also served as an organizing model, which has advanced psychoanalysis as a science and as a therapy. The paradigm offered by the structural formulations provided a framework for many developmental and clinical studies as well as an approach to a general psychology of human behaviour. Therapeutic advances have been made, but the art of therapy has not kept pace with the scientific advances. Theories have become too far removed from their clinical base; a changing sociologic climate that has reduced the impact of the rational attitude offered by psychoanalysis and the failure of psychoanalytic therapy to cure all ills have contributed to the dissatisfaction. ...read more.

The writer started the essay well with a good introduction. They go on to cover Freud's tripartite model in some detail and appear to have a good grasp of this. However, some of the work appears to have been plagiarised and therefore needs to be written in the writer's own words to show that they have an understanding of Freud's model.

More time should have been spent on the ego defences such as sublimation, projection, repression, denial, displacement etc. etc.

The criticism of Freud's psychoanalytical model was not backed up with evidence and so appeared as if it was only the writer's personal opinion. The writer has to reference their work so that it is clear they have read around the subject.