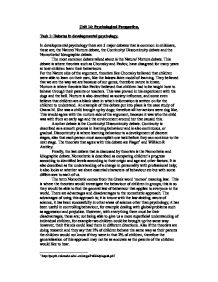 In developmental psychology there are 3 major debates that is common in childcare, these are; the Nature/ Nurture debate, the Continuity/ Discontinuity debate and the Nomothetic/ Ideographic debate.

Unit 14: Psychological Perspective. Task 1: Debates in developmental psychology. In developmental psychology there are 3 major debates that is common in childcare, these are; the Nature/ Nurture debate, the Continuity/ Discontinuity debate and the Nomothetic/ Ideographic debate. The most common debate talked about is the Nature/ Nurture debate. This debate is where theorists such as Chomsky and Pavlov, have disagreed for many years at how children learn their behaviours. For the Nature side of the argument, theorists like Chomsky believed that children were able to learn on their own, like the laissez-faire model of learning. They believed that we are the way we are because of our genes, therefore nature is innate. Nurture is where theorists like Pavlov believed that children had to be taught how to behave through their parents or teachers. This was proved in his experiment with the dogs and the bell. ...read more.

Finally, the last debate that is discussed by theorists is the Nomothetic and Idiographic debate. Nomothetic is described as comparing children's progress according to identified levels according to their origin and age and other factors. It is also described as the understanding of a change in personality with professional help; it also looks at whether we share essential characters of behaviour etc but with some differences to each of us. The term Nomothetic comes from the Greek word 'nomos' meaning law. This is where the theorists would investigate the behaviour of children in groups, this is so they would be able to find the general law of behaviour that applies to everyone in the world. There are advantages and disadvantages to the nomothetic approach. The advantages of using this approach is; it is intone with the law abiding nature of science, it has been successfully in other areas of science other than psychology, it has been useful in controlling behaviour, for example dealing with global problems such as aggression and prejudice. ...read more.

Therefore, this approach focuses on the things that are different between children's behaviour and as to how they are different. As with the Nomothetic approach there are advantages and disadvantages towards the idiographic approach, these are: Advantages; it can provide a more complete and global understanding of the child, it can be the most efficient approach in this area of study, of which Freud and Piaget agree with, it can be the only possible approach to use in studying this area such as trying to teach an animal how to behave. Disadvantages; we can't legally generalise or apply any findings carried out from one child to other children- Freud and Piaget had been accused of creating global theories based on idiographic data, therefore limited, unrepresentative samples of participants. Another disadvantage to this approach is that it can be unreliable and unscientific; this is because they tend to be subjective, long term, flexible and unstandardised.2 1 http://psych.colorado.edu/~colunga/P4684/piaget4.pdf 2 www.ecgbert.sheffield.sch.uk/.../Debates%20(ATr)/The%20Ideographic%20vs.ppt. ...read more.

This is a question that asks candidates to outline the three biggest debates in Developmental Psychology. They are accurately identified by the candidate, and I assume the question will be worth a total of 12 marks, assigning four marks for ...

This is a question that asks candidates to outline the three biggest debates in Developmental Psychology. They are accurately identified by the candidate, and I assume the question will be worth a total of 12 marks, assigning four marks for each of the theories. Candidates will be expected to show evidence of knowledge and understanding of each of the three theories and also of the pioneering psychologists who studied them.

This candidate correctly identifies the three theories (Nature vs. Nurture, Continuity vs. Discontinuity, and Nomothetic vs. Ideographic debate). They give a fair description, which is often led astray to ambiguity with a poor Quality of Written Communication (QWC) (more on this later). The result is an answer that can make sense to psychology students and most likely the examiner, but whether the examiner or the mark scheme will allow answers that might not make much sense to a non-psychology student is always up in the air, so I recommend the candidate being far more precise with their written expression, especially with sentences like: "This was proved in his experiment with the dogs and the bell" when referring to Pavlov discovering the epoch-defining Classical Conditioning.

Frequently, there is some detail missed, and whilst it usually only consists of simple things like forgetting to mention important psychological terms, e.g. - classical conditioning or behaviourism, these instances will all add up and may give the examiner the indication that the knowledge of psychological vocabulary is poor, and this is something that must be avoided. Learn your key terms; know how to apply them and how to incorporate them into answers like these.

The Level of Analysis is not tested here, but knowledge and understanding (AO1) is, and so that will be evaluated in this part of the review.

The candidate demonstrates a fair level of knowledge on the three debates, even the more complex ones like the Nomothetic/Ideographic debate. They make a good attempt at explaining each before providing the examiner with an example of the theorist and/or study to show that there is evidence for the theory. Where this is not so well executed is the Continuity/Discontinuity debate. The candidate fails to give any research evidence and instead only names two practitioners who support the Discontinuity debate. This is where most of the candidates marks are dropped as they have only dedicated a very brief number of lines to this debate, whereas others debates have much more information written about them. This suggests that the candidate has not revised sufficiently enough to cover these three debates equally, and this question will deliberately be looking to catch candidates out by asking about all three. I recommend candidates revise all areas to ensure that any surprises that may appear in the paper can be covered easily.