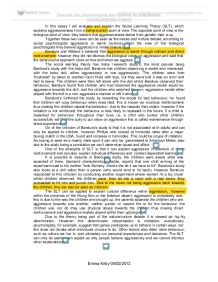 In this essay I will evaluate and explain the Social Learning Theory (SLT), which explains aggressiveness from a behaviourism point of view. The opposite point of view is the biological point of view; they believe that aggressiveness stems from genetic make-up. Together these two views can be seen as the nature and nurture debate; according to social psychologists aggression is learnt (nurture), from the view of the biological psychologists they believe aggression is innate (nature). Bandura and Walters's believed that aggression is learnt through indirect and direct reinforcement; however they did not dismiss the biological views on aggression and said that the behaviourist approach looks at how and when we aggress. The social learning theory has many research study's, the most popular being Bandura's study with the bobo doll. Bandura has children observing a model who interacted with the bobo doll, either aggressively or non-aggressively. The children were then 'frustrated' by taken to another room filled with toys, but they were told it was an error and had to leave. The children were then left alone with the doll whilst Bandura observed their behaviour. Bandura found that children who had observed the aggressive model would be aggressive towards the doll, and the children who watched the non-aggressive model either played with the doll in a non-aggressive manner or left it alone. Bandura's furthered the study by rewarding the model for bad behaviour; he found that children will copy behaviour when rewarded, this is known as vicarious reinforcement, thus making the children repeat the behaviour due to the rewards they obtain, however if the imitation is not reinforced, the behaviour is less likely to repeated in the future. If a child is rewarded for behaviour throughout their lives i.e. a child who bullies other children successfully will lead the bully to put value on aggression this is called maintenance through direct experience. On of the criticism of Bandura's study is that it is not associated with adults and can only be applied to children, however Phillips who looked at homicide rates after a major boxing match in the USA, found and increase in homicides. ...read more.

* If the interview is face-to-face, the interviewee may be influenced by the personality and appearance of the interviewer, which may affect the way they respond. Ethics * The interviewer should be especially careful concerning the risk of harm while conducting the interview. If they are discussing sensitive topics, then the interviewee may feel uncomfortable. The interviewer should ensure that the interviewee is aware that they don't have to respond if they won't want to. Case studies * This involves studying an individual or small group, usually over a long period of time and within a real-life setting. * It mainly involves qualitative data from interviews and observations. Unique circumstances are often studied in case studies. For example, an interesting case study could be done for Elisabeth Fritzl, who was held captive in Josef Fritzl's basement for 24 years. Evaluation * Due to the in-depth nature of a case study, they are capable of providing interesting and rich data about individuals. * Unfortunately, the focus only a few people means that it is difficult to generalize the findings. They therefore lack reliability. * The case study involves the researcher spending a lot of time with the participants, during which a relationship may develop. This means that they should be extra careful concerning privacy, where they should recognise when they are being too intrusive. Researchers often use the initials of the participant being studied in a case study as a measure of improving confidentiality. * It is difficult for the researcher to separate themselves from what they are studying, meaning that their interpretation of the participant's behaviour is subjective. This is even more important and problematic due to the large amount of data that is often collected from a case study. * The case study involves a lot of retrospective data, in which the participant has to remember events from their past. Memory errors may therefore influence what they say to the researcher. ?? ?? ?? ?? Discuss one psychological explanation for aggression. Social Learning Theory Emma Kirby 05/02/2012 ...read more.

Overall, a very good GCSE essay indeed. There are a few terms which could have been explained more carefully, and a couple of minor language errors, but these don't affect the overall standard.
5 stars.