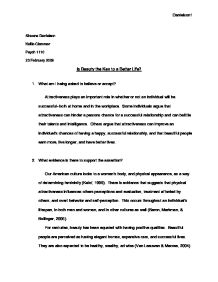 Is Beauty the Key to a Better Life?

Shawna Danielson Kellie Clemmer Psych 1110 23 February 2009 Is Beauty the Key to a Better Life? 1. What am I being asked to believe or accept? Attractiveness plays an important role in whether or not an individual will be successful- both at home and in the workplace. Some individuals argue that attractiveness can hinder a persons chance for a successful relationship and can belittle their talents and intelligence. Others argue that attractiveness can improve an individual's chances of having a happy, successful relationship, and that beautiful people earn more, live longer, and have better lives. 2. What evidence is there to support the assertion? Our American culture looks to a women's body, and physical appearance, as a way of determining femininity (Kalof, 1999). There is evidence that suggests that physical attractiveness influences others perceptions and evaluation, treatment afforded by others, and overt behavior and self-perception. This occurs throughout an individual's lifespan, in both men and women, and in other cultures as well (Baron, Markman, & Bollinger, 2006). For centuries, beauty has been equated with having positive qualities. ...read more.

While there were both positive and negative characteristics attributed to the pictures, there were a higher percentage of negative characteristics. The majority of the pictures were described as 'vain', 'egotistical', 'snobbish', 'cruel', 'evil', 'manipulative', 'immature', 'dumb', 'sarcastic', and 'uncooperative'. Suprisingly- among women rather than men, the images in Cosmopolitan were described as 'cold' and 'superficial'. Men tended to see Cosmopolitan as portraying 'strong' and 'confident' women. Both men and women described the images as portraying 'confident', 'strong', 'caring', and/or 'loyal' individuals (Kalof, 1999). When it comes to cosmetics- women wearing makeup are perceived as being more feminine then those who do not wear makeup. Cosmetics enhance facial symmetry, thus increasing perceived attraction. When wearing makeup, a woman's mood and behavior can also change from their mood and behavior without makeup. Individuals report a greater sense of well-being and confidence when wearing makeup, versus not wearing makeup (Nash, Fieldman, Hussey, L�v�que, & Pineau, 2006). Studies suggest that facial attractiveness can inadvertly affect descions when it comes to dating, friends, and job hiring (Kalof, 1999). Wearing makeup has been correlated with positive benefits such as higher earning potential, professional class, more prestigious job offers, health, and confidence (Nash et al., 2006). ...read more.

I found nothing conclusive in the content saying one way or another. I think that it may be true that beautiful people have an easier time. However, they may struggle more than the 'average' person to insure they keep their apperances. Also, as cosmetics seem to inhance a persons apperances, those who consider themselves unattractive could improve their appearance with the use of cosmetics. Citation Baron, R. A., Markman, G. D., & Bollinger, M. (2006). Exporting social psychology: Effects of attractiveness on perceptions of entrepreneurs, their ideas for new products, and their financial success. Journal of Applied Social Psychology, 36, 467-492. Farley, S. D., Chia, R. C., & Allred, L. J. (1998). Stereotypes about attractiveness: When beautiful is not better. Journal of Social Behavior & Personality, 13, 479-492. Kalof, L. (1999). Stereotyped evaluative judgments and female attractiveness. Gender Issues, 17(2), 68-82. Nash, R., Fieldman, G., Hussey, T., L�v�que, J.-L., & Pineau, P. (2006). Cosmetics: They influence more than caucasian female facial attractiveness. Journal of Applied Social Psychology, 36, 493-504. van Leeuwen, M. J., & Macrae, C. N. (2004). Is beautiful always good? Implicit benefits of facial attractiveness. Social Cognition, 22(6), 637-649. ?? ?? ?? ?? Danielson1 Student's Last Name 1 ...read more.

This candidate responds very well to the task set and writes a cohesive, competent answer that is every bit deserving of an A/A* grade for GCSE. The candidate considers many psychological phenomena and "implicit cognitions" with regards to how attractiveness ...

This candidate responds very well to the task set and writes a cohesive, competent answer that is every bit deserving of an A/A* grade for GCSE. The candidate considers many psychological phenomena and "implicit cognitions" with regards to how attractiveness influences people. The answers to the individual questions are structured well and command a very adept knowledge of Psychology. I like the way each example of information is clearly set in the candidates own words, rather than regurgitated from source material and there appears to be a very obvious understanding of a great deal of psychological studies that prove and refute the idea that we as humans are naturally biased when in comes to attractiveness.

The Level of Analysis is very good; albeit very systematic. This can be attributed to the style of answer being set in individual questions though. The answer reads perfectly, and the candidate develops their answer more and more as you read on, owing to the ease of the transmission of information. This naturally pushes the essay forward and it's good to see such a well-supported argument. All the analytical points are backed up well-sourced psychological studies and they are structured cohesively.

The Quality of Written Communication is very good. The language used is wholly appropriate with specialist terminology that suits itself to the topic being discussed. The handling of English is as is to be expected.