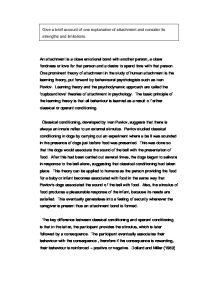 An attachment is a close emotional bond with another person, a close fondness or love for that person and a desire to spend time with that person. One prominent theory of attachment in the study of human attachment is the learning theory, put forward by behavioural psychologists such as Ivan Pavlov. Learning theory and the psychodynamic approach are called the 'cupboard love' theories of attachment in psychology. The basic principle of the learning theory is that all behaviour is learned as a result of either classical or operant conditioning. Classical conditioning, developed by Ivan Pavlov, suggests that there is always an innate reflex to an external stimulus. ...read more.

Also, the stimulus of food produces a pleasurable response of the infant, because its needs are satisfied. This eventually generalises into a feeling of security whenever the caregiver is present thus an attachment bond is formed. The key difference between classical conditioning and operant conditioning is that in the latter, the participant provides the stimulus, which is later followed by a consequence. The participant eventually associates their behaviour with the consequence, therefore if the consequence is rewarding, their behaviour is reinforced - positive or negative. Dollard and Miller (1959) suggest that all humans have primary motives to satisfy their drives for hunger and thirst. The means by which this is achieved (e.g. ...read more.

One cylinder was wrapped with towelling and the other with a teat for milk. Harlow reported that the infant monkeys spent their time clinging to the cloth 'surrogate' mother. This concluded that monkeys have an innate need for comfort but only food and no comfort and only comfort and no food would not be sufficient for healthy development. Schaffer and Emerson's (1964) study also casts doubt on 'cupboard love' theories of attachment as they found that infants became attached to people who do not provide essential care. The learning theory may also be doubted as Pavlov's evidence was based on an experiment with dogs - can this evidence be transferred to produce a reliable representation of human behaviour? ...read more.

This question asks candidates about behaviourism (or, the Behaviourist Perspective). There is a clear understanding of the two main features of behavioural manipulation (Operant and Classical Conditioning) and there is evidence that the candidate is aware of how each one ...

This question asks candidates about behaviourism (or, the Behaviourist Perspective). There is a clear understanding of the two main features of behavioural manipulation (Operant and Classical Conditioning) and there is evidence that the candidate is aware of how each one is structured; who initiated them; and each method comes with evidence that shows the examiner this candidate possesses both theoretical knowledge and also the skills needed to provide practical evidence to back up the points that are made.

The Level of Analysis is very good. There are a number of psychological studies into the effects of both Operant and Classical Conditioning referenced in this answer, with a detailed outline of each one and then a passage into how said studies relate to proving or refuting the theory of behaviourism. A vast range of specialist terminology is used in order to script their answer - this is an excellent use of psychological phrases and terms that show the examiner the candidate has the ability to write with confidence and shows an elaborate knowledge of this area of Psychology.
The example the candidate gives are wholly appropriate, showing they have knowledge of the syllabus and of Psychology's (namely behaviourism's) principles and practical explanation for it's theories. However, to achieve top marks this candidate would have done well to reference Watson & Raynor's study of the Classical Conditioning of a Phobia ("Little Albert", who became conditioned to fear white rats) as it is one of the most famous examples of conditioning a phobia. Nevertheless, there explanation of Pavlov's dogs is a very well-expressed argument for the uses of behaviourism, sourcing information from the study and how it relates the to principles of behaviourism.

The Quality of Written Communication is fine. A few minor irks are dotted about, such as an ambiguous comment about Harlow's study into 'surrogate' monkeys and the children: "This concluded that monkeys have an innate need for comfort but only food and no comfort and only comfort and no food would not be sufficient for healthy development". The meaning of this sentence is buried slightly because of a lack of commas. To reach the top band of marks, candidates must make all their responses very clear with a high quality of writing.