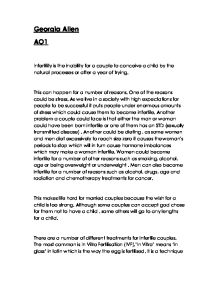 Infertility is the inability for a couple to conceive a child by the natural processes or after a year of trying.

This can happen for a number of reasons. One of the reasons could be stress. As we live in a society with high expectations for people to be successful it puts people under enormous amounts of stress which could cause them to become infertile. Another problem a couple could face is that either the man or woman could have been born infertile or one of them has an STD (sexually transmitted disease) . Another could be dieting , as some women and men diet excessively to reach size zero it causes the woman's periods to stop which will in turn cause hormone imbalances which may make a woman infertile. Women could become infertile for a number of other reasons such as smoking, alcohol, age or being overweight or underweight . Men can also become infertile for a number of reasons such as alcohol, drugs, age and radiation and chemotherapy treatments for cancer.

This makes life hard for married couples because the wish for a child is too strong. Although some couples can accept god chose for them not to have a child , some others will go to any lengths for a child.

There are a number of different treatments for infertile couples. The most common is In Vitro Fertilisation (IVF).’In Vitro’ means ‘in glass’ in latin which is the way the egg is fertilised. It is a technique were an egg is taken from the woman's womb and placed on a dish and sperm is taken from the man and used to fertilise the egg on the glass . Once the egg has been fertilised and has began to grow as a fetus it is implanted back into the woman's womb where it grows for 9 months.

The second is Surrogacy. Surrogacy is where another woman carries the baby for another couple who are unable to do so. An egg is taken from the infertile woman and a sperm from the partner and is fertilised then inserted into the surrogates womb where it grows and when the child is born it is given back to the couple.

Another treatment is  Artificial Insemination By Donor (AID) . This is a treatment where the sperm of a donor , who is usually unknown to the couple , is medically inserted into the neck of the woman's womb where it fertilises the egg and grows into a child .

The final treatment is egg donation . This is similar to AID ,only an egg from a donor who is usually unknown to the couple , is fertilised in a lab then medically inserted into the infertile woman's womb to grow into the child .

Other Christians have opposite views about infertility treatments than catholics. They think infertility treatments are a good thing as it brings new life to the world and makes a couple happy. Some Christians might object to treatments where a donor is involved as some people class this as adultery because it involves somebody else in the marriage and that is wrong because it is in the ten commandments. They do agree with AIH as it involves no third party and is just between a husband and wife. Some Christians are against fertility treatments for unmarried couples or woman past the child bearing age and even homosexuals. As they think that it is not the way God planned it to be .

Muslims agree to most treatments as long as they involve no third party and all natural methods of conception have failed . Muslims are completely against surrogacy and adoption . Muslims believe treatments such as AIH and IVF are ok because they use the sperm of the husband and no other person is involved. Islam is against AIH because it has been donated by another man and is seen as adultery .