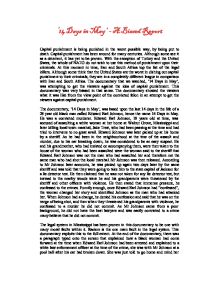 Interviews with people who worked at the penitentiary and that had known Edward Earl Johnson for the 8 years in which he had been there were also included in the documentary. Everyone that had known Edward Earl Johnson, with the exception of the prison Governor, were 100 per cent positive that he was not guilty. I say with exception of the prison Governor because he was caught in two minds and he did not spend as much time with Edward Earl Johnson compared with the other prisoners, the warden, guards, etc. The other prisoners all believed that he was not guilty and they all felt as though they were all brothers. The fact that they said this, makes you wonder if not only Johnson was not guilty, but maybe too his fellow prisoners. Sympathy for Edward Earl Johnson filled the whole of Death Row to the day of his execution. The TV crew themselves had not known him for as long as the others, but they too knew that an innocent man's life was coming to an untimely end. These interviews reinforce Edward Earl Johnson's innocent to the viewers. The interviews back up the viewers first impressions of him, that he is an innocent man. It also makes you feel sympathetic for him, which I did when I watched the documentary. ...read more.