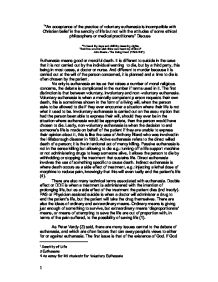 &amp;#147;An acceptance of the practice ofvoluntary euthanasia is incompatible with Christian belief in the sanctity of life but not with the attitudes of some ethical philosophers or medical practitioners&amp;#148; Discuss.

1"An acceptance of the practice of voluntary euthanasia is incompatible with Christian belief in the sanctity of life but not with the attitudes of some ethical philosophers or medical practitioners" Discuss "To haunt thy days and chill thy dreaming nights, That thou wouldst wish thine own heart dry of blood" John Keats- The Living Hand (1795-1821) Euthanasia means good or merciful death. It is different to suicide in the case that it is not carried out by the individual wanting to die, but by a third party, this being in most cases, a doctor or nurse. And different to murder because it is carried out at the will of the person concerned, it is planned and a time to die is often chosen by the patient. No only is euthanasia an issue that raises a number of moral religious concerns, the debate is complicated in the number if terms used in it. The first distinction is that between voluntary, involuntary and non-voluntary euthanasia. Voluntary euthanasia is when a mentally competent person requests their own death, this is sometimes shown in the form of a living will, when the person asks to be allowed to die if they ever encounter a situation where their life is not what it used to be. Involuntary euthanasia is carried out on the assumption that had the person been able to express their will, should they ever be in the situation where euthanasia would be appropriate, then the person would have chosen to die. Lastly, non-voluntary euthanasia is when the decision to end someone's life is made on behalf of the patient if they are unable to express their opinion about it, this is like the case of Anthony Bland who was involved in the Hillsborough disaster in 1993. Active euthanasia refers to the direct willed death of a person; it is the intentional act of mercy killing. ...read more.

4. Justice. All persons have a prima facie moral obligation to act justly or fairly to others in the context of respecting each other's rights, in the context of obeying morally acceptable laws, and in the context of the distribution of scarce resources. Interpretation of the precise nature and extent of these obligations is highly dependent on. both cultural and individual perspectives. (14) 4 These four principles or values do not comprise a single ethical theory. Indeed, they often conflict and require interpretation and balancing. The four principles are given different weight in different cultures, and some cultures would wish to add additional principles or values. Moreover, substantive disagreements exist within cultures about both their scope and relative weights. Nonetheless, their acknowledgment provides a valuable cross-cultural basis for medico-moral analysis, discussion, and decision making. It accepts that patients may refuse treatment that will eventually end their life, but it is opposed to lethal injections being the sole purpose to end life. But with the BMA, there are views on euthanasia from other countries. In Oregon doctors are allowed to provide the means for ending life, but the patient itself has to administer it. In Australia, however, more extensive participation from the doctor is allowed. And in Holland where euthanasia is legal, they will only allow euthanasia where there are explicit requests for it, and they will consider each situation carefully. With PAS however, the doctor will simply try to help the patient with his or her course of action, where with euthanasia, the doctor will be in control of the situation. Many ethicists (3) also agree will some members of the medical profession. Grisez and Boyle believe that there are two basic assumptions used when defending euthanasia. The assumption that there is a difference between bodily life and personal life. They reject the view that if you are not bodily alive, that you are still a person. ...read more.

Many Doctors would not practice euthanasia, either because they would be afraid of going to prison if they did, or because they don't feel that it is the right thing to do. Some doctors however, will allow PAS, this is because it brings their involvement with the death to an absolute minimum, and they cannot be blamed for the death. Voluntary euthanasia also has many mixed opinions from ethicists. Some ethicists like Fletcher and Maguire believe that if the person wishes euthanasia, and that it is the best option for them, then it should be allowed. They believe that we have the responsibility to choose life and death, even if death is the right option. However, some ethicists like Grisez and Boyle believe that there are certain basic human goods constitutive of human well being and the key issue when discussing euthanasia is whether an action is directly against a basic good. As a first glance, you would say that the practice of euthanasia is incompatible with the Christian belief in the Sanctity of Life, with the Roman Catholic beliefs that any type of euthanasia is wrong, but even with them allowing the idea of double effect, this statement is disproved. Both the Methodist Church and the Church of England will allow euthanasia in certain situations. Members of the Methodist Church are now campaigning to make euthanasia legal as they believe if it isn't made legal, people will continue to practice it, but without the legitimate means, and other lives will be at risk. The Church of England are against euthanasia, but see the fact that human life can go beyond the means of suffering, and will allow euthanasia if there is consent from more than one doctor and in only certain circumstances. The practice of euthanasia is incompatible with the Roman Catholic belief as they believe that life is a gift of God, and should only be given and taken away by him. Their belief in the Sanctity of Life is too great, and they will not allow euthanasia, but see self-sacrifice, not as suicide, but as a gift to God. ...read more.