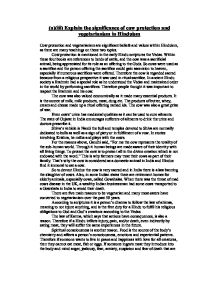 (a)(iii) Explain the significance of cow protection and vegetarianism in Hinduism Cow protection and vegetarianism are significant beliefs and values within Hinduism, as there are many teachings on these two topics. Cow protection is mentioned in the early Hindu scriptures the Vedas. Within these four books are references to herds of cattle, and the cow was a sacrificial animal, being appreciated for its role as an offering to the Gods. So cows were used as a sacrifice and the person offering the sacrifice could gain ascension to heaven, especially if numerous sacrifices were offered. Therefore the cow is regarded sacred because from a religious perspective it was used in ritual sacrifice. In ancient Hindu society a Brahmin had a special role as he understood the Vedas and maintained order in the world by performing sacrifices. Therefore people thought it was important to respect the Brahmin and his cow. The cow was also valued economically as it made many essential products. It is the source of milk, milk products, meat, dung etc. ...read more.

The law of Karma, which says that actions have consequences, is also a reason. Therefore if a Hindu inflicts injury, pain, and/or death, even indirectly by eating meat, they will suffer the same experiences in the future. Spiritual consciousness is another reason. Food is the source of the body's chemistry and affects a person's consciousness, emotions and experiential patterns. Therefore if someone wants to live in peace and happiness with love for all creatures, then they cannot eat meat, fish or eggs. If someone ingests meat they introduce into the body and mind anger, jealousy, fear, anxiety, suspicion and fear of death that are all found in the flesh of butchered creatures. Therefore, shakaharis live in higher consciousness and mansaharis drown in lower consciousness. Health is another reason as medical studies prove that a vegetarian diet is easier for the body to digest, contains a larger amount of nutrients and doesn't overburden or give more impurities to the body. Many vegetarians are more immune to contemporary diseases so they live longer, healthier and more active lives. ...read more.

ISKCON (International Society of Krishna Consciousness) devotees refrain from all meat, fish, eggs, alcoholic products and other fermented products, onion garlic and mushrooms. Many devout Hindus follow this rule but many Hindus will avoid all meat, fish and eggs. All Hindus should avoid eating beef above everything else. The Vedic scriptures encourage not eating meat but people who simply cannot do without meat are encouraged to eat animals killed in sacrifice but accept the karmic consequences of doing so. Also, the scriptures only encourage prashad in the vegetarian diet which is food blessed in ritual by God. Ahimsa, the law of not injuring living creatures, makes many Hindus want to be vegetarian avoiding meat, fish and eggs but for those who are less strict they will certainly avoid beef. Prashad means 'the mercy of the Lord' and is distributed to visitors at temples who receive it respectfully in their right hands. Some Hindus will refuse to eat anything but prashad so they will bless their food at shrines in their homes before eating it. For all these reasons cow protection and vegetarianism are key aspects of Hinduism. ...read more.