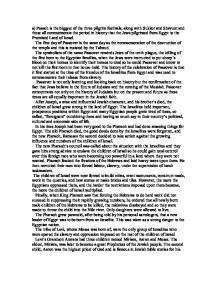 a) Pesach is the biggest of the three pilgrim festivals, along with Sukkot and Shavuot and these all commemorate the period in history that the Jews pilgrimed from Egypt to the Promised Land of Israel.

a) Pesach is the biggest of the three pilgrim festivals, along with Sukkot and Shavuot and these all commemorate the period in history that the Jews pilgrimed from Egypt to the Promised Land of Israel. The first day of Passover is the same day as the commemoration of the destruction of the temple and this is insisted by the Talmud. The symbolism of the name Passover reminds Jews of the tenth plague, the killing of the first born to the Egyptian families, when the Jews were instructed to put sheep's blood on their homes to identify their homes to God so he could Passover and know to not kill the first born in that house-hold. The history of the celebration of Passover is that it first started at the time of the Exodus of the Israelites from Egypt and was used to commemorate their release from slavery. Passover is not only learning and looking back on history but the confirmation of the fact that Jews believe in the future of Judaism and the coming of the Messiah. Passover concentrates not only on the history of Judaism but on the present and future as these times are all equally important in the Jewish faith. After Joseph, a wise and influential Jewish character, and his brother's died, the children of Israel grew strong in the land of Egypt. The Israelites held important, prosperous positions within Egypt and many Egyptian people grew tired of these, so called, "foreigners" outshining them and having so much say in their country's political, cultural and economic side of life. In his time Joseph had been very good to the Pharaoh and had done amazing things for Egypt. The old Pharaoh died, the good deeds done by the Israelites were forgotten, and the new Pharaoh, Rameses the second decided to take action against the growing influence and numbers of the children of Israel. ...read more.

They took the raw dough on their journey and baked it in the hot desert sun into hard crackers called Matzoh. On the fourteenth day of the first month at twilight is the Lord's Passover. And on the fifteenth day of the same month is the Feast of Unleavened Bread to the Lord; seven days you must eat unleavened bread The second question is "On all other nights we eat many kinds of vegetables and herbs. Why do we eat bitter herbs, maror, at our Seder?" Maror is eaten because it reminds Jews of the bitter and cruel way the Pharaoh treated the Jewish people when they were slaves in Egypt. The third question is, "Why is it that on all other nights we do not dip even once, but on this night we dip twice?" On all other nights, Jews don't usually dip one food into another. At the Seder meal, Jews dip the parsley in salt water and the bitter herbs in Charoset. This is because it reminds Jews how hard the Jewish slaves worked in Egypt. The fourth question is "Why is it that on all other nights we eat either sitting or reclining, but on this night we eat in a reclining position?" The people at the table have a relaxed evening to celebrate their freedom and to celebrate the fact that they can, and they have the opportunity to be able to be comfortable. In the Seder plate there's also haroset made with grated apples, cinnamon, honey, chopped nuts and wine or grape juice which are there to symbolise mortar which was used by the Israelites to make the bricks used in building the Pharaoh's buildings when they were enslaved. Jews use eat a roasted egg during the Seder meal, this is traditionally a symbol of mourning, and this reminds Jews of the destruction of the Temple. The last thing to be eaten during the Seder meal is the roasted shankbone and it represents a Pascal Lamb that was brought to the temple in Jerusalem on the eve of Passover. ...read more.

During Jewish history Judas lit a lamp with a day's oil in it and it lasted eight days, which was a miracle, and this is the symbolism of the oil. Purim is a very enjoyable festival for young children because it includes a fancy dress party for children but involves learning a lot about their religion as the characters that children dress up as are King Ahashverosh, Vashti, Queen Esther, Mordechai, and the evil Haman, these characters are all included in the story of Purim. Costumes and masks are worn to disguise the wearers' identity. Mistaken identity plays an important role in Purim, possibility originating from Esther's concealment of her Jewish heritage or in Haman's mistaken belief that the King's reward was meant for him in the story of Purim. Sukkot is another festival in which children may learn a lot about their faith through having fun and being creative. Sukkot means booths, and refers to the temporary dwellings that the Israelites built to sleep in as they walked through the desert after their exodus from Egypt. Children are often encouraged to make crude Sukkah's as a fun and creative way to learn more about their ancestors. Even though you may not be able to teach a child the whole Jewish history you can help them enjoy learning so that in later life they will want to share the faith with their children, remembering the good times that they had. Judaism very much encourages multiplication within the faith to make it as big and as strong a faith as possible. Adults will learn all through life, after each festival, a little more complex information and will slowly build up an all-round knowledge of Jewish history and this I a very good reason to start teaching a child at a young age. Although I say that I strongly agree with the quote, "Festivals are the best way to learn about your faith"; I'm not trying to say that festivals make you learn everything about your faith, learning about festivals give someone a good grasp of their faith or someone else's. ...read more.