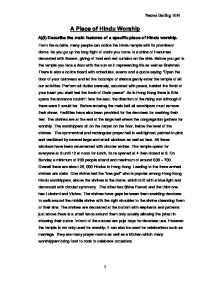 A Place of Hindu Worship A)(i) Describe the main features of a specific place of Hindu worship. From the outside, many people can notice the Hindu temple with its prominent dome. As you go up the long flight of stairs you come to a shine of Hanuman decorated with flowers, giving of food and red curtains on the side. Before you get to the temple you face a door with the sun on it representing life as well as Brahman. There is also a notice board with schedules, events and a quote saying "Open the door of your calmness and let the footsteps of silence gently enter the temple of all our activities. Perform all duties serenely, saturated with peace, behind the throb of your heart you shall feel the throb of Gods peace". As in Hong Kong there is little space the entrance couldn't face the east, the direction of the rising sun although if there were it would be. Before entering the main hall all worshipers must remove their shoes. Facilities have also been provided for the devotees for washing their feet. ...read more.

After arati, the helper sweeps the temple and people come to sing bhajan to the deity. In some temples in the evening kirtan is carried out by a visiting priest. Men sit on one side of the priest, ladies and children on the other intently listening to him talk about the importance of doing ones religious duties which is followed by a story to illustrate the moral lesson. It is then ended with Prasad. (iii) Analyse and Explain the role and function of the Mandir in the local Hindu community. The main function of the Hindu temple is for puja, worship, which plays a very strong role in the daily lives of Hindus. In India the Hindu temple is a house for a god or goddess. Worshippers go to the temple to leave an offering or to pray and express their devotion. In the villages of India many shrines are in the open air for local people to care for them. The Hindu scriptures say that 'any offering no matter how humble is acceptable to god as long as it is given with sincerity and love'. ...read more.

Though the main point made is that whether you visit the temple once a day or not all, it does not show whether or not they are a good Hindu. Overall, I don't think that in order to be a good Hindu a believer must go to the Mandir, all one needs is to show to be a considered a good Hindu is love, faith and devotion to God with sincerity. Hindus are not judged by how many times they may visit a temple but by how much they follow their faith and gain good karma. I believe that going to the temple is a strong act of devotion but it's not a stronger act of devotion compared to worship at home. In the Hindu scriptures it states that any offering no matter how humble is acceptable to God as long as it given with sincerity and love I think this can be applied to worship at home because what matters is the actual worship, not where the worship is taken place. Although for Hindus that live aboard I do believe going to a temple would strengthen their beliefs as there are many clubs for them to celebrate their faith and they are provided with classes to learn more about their religion, learn their native language as well as yoga. ...read more.