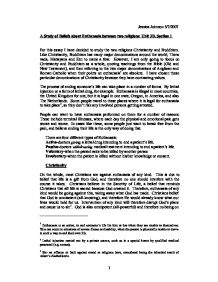 A Study of Beliefs about Euthanasia between two religions: Unit 3B, Section 1.

Jessica Johnson 5/7/2007 A Study of Beliefs about Euthanasia between two religions: Unit 3B, Section 1 For this essay I have decided to study the two religions Christianity and Buddhism. Like Christianity, Buddhism has many major denominations around the world; Thera vada, Mahayana and Zen to name a few. However, I am only going to focus on Christianity and Buddhism as a whole, quoting teachings from the Bible (Old and New Testament), and then referring to the two major denominations of Anglican and Roman Catholic when their points on euthanasia1 are absolute. I have chosen these particular denominations of Christianity because they have contrasting values. The process of ending someone's life can take place in a number of forms. By lethal injection or a form of lethal drug, for example. Euthanasia is illegal in most countries, the United Kingdom for one, but it is legal in one state, Oregon, in America, and also The Netherlands. Some people travel to these places where it is legal for euthanasia to take place2, so they don't risk any involved persons getting arrested. People can want to have euthanasia performed on them for a number of reasons. These include terminal illnesses, where each day the physical and emotional pain gets worse and worse. In cases like these, some people just want to break free from the pain, and believe ending their life is the only way of doing that. There are four different types of Euthanasia: Active-doctors giving a lethal drug intending to end a patient's life. Passive-doctors withdrawing medical treatment intending to end a patient's life. Voluntary-when the patient asks to be killed by another person Involuntary-when the patient is killed without his/her knowledge or consent. ...read more.

And therefore if someone wants to end their life, we have to respect their decision. Some may say that this is not an effective way of showing love, that is, to kill them means that you love them. Of course it isn't, for if every time people fell in love then there would be an awful lot of murders going on. I mean that if we truly love someone, regardless of our feelings of anxiety or hurt for when they are gone, we would be able to sympathise with their pain and discomfort in this world. This is why some Christians do believe in the goodness of euthanasia. This is a situation ethical approach. Palliative Care is when we care for someone who is close to death, making his or her last few days alive as comfortable and as happy as possible. Christians believe this is very important, so as to prepare them for when they reach heaven. Therefore if someone wants to die, then Christians believe they should be treated with utmost respect and comfort. Rather than try to persuade someone to re-think about ending his or her life, special Christian homes can try to prepare and relax the patient, ready for death. Some homes hope that this will change the patient's mind, that they will be at ease and their faith will keep them going. The Bible would be read to them, things like John 3:16 "For God so loved the world that he gave his only begotten Son, that whoever believes in him shall not perish but have eternal life". This means that whoever believes in Jesus will live with God in heaven forever. ...read more.

It would be very hard, of course, however I think that if in the long-term they will just continue to deteriorate, then as I am Buddhist and it is in my nature to bring peace and harmony to others, I would have to let them free. Since Buddhists believe in reincarnation the manner of death is of great importance. Bad karma may affect anyone who helps9. Conclusion Following on from the understanding of the two religions two main points can be drawn out from the essay. In Christianity, the vast majority are against euthanasia. Not only does it disobey God's wishes of "loving your neighbour" but it also puts Christians in a position of playing God, and therefore going against His plans. Also euthanasia is illegal, and as Christians are good people, violating the governmental law would be a serious sin in itself. Through the passages listed in the Bible, we can see that Christians follow God's wishes, such as "Do not kill" and so I think the majority would put God's rules before morals. In contrast, Buddhists cannot take the point of view that killing someone would be against God's wishes, because they don't believe in a god. Instead, being kind and considerate to others lets them receive good karma, and so helps them with their next life. In this way, euthanasia can be looked upon as good or bad, depending on the context of it. As a Buddhist, it is very important to die with dignity and naturally. Euthanasia isn't natural, quite the opposite! So therefore a high majority of monks would be against it, however in the end it would be a personal decision. ...read more.