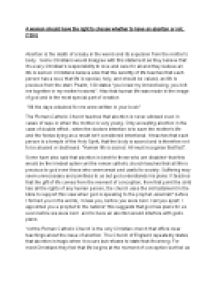 a woman should have the right to have an abortion

﻿A woman should have the right to choose whether to have an abortion or not. (12m) Abortion is the death of a baby in the womb and its expulsion from the mother?s body. Some Christians would disagree with this statement as they believe that it?s every Christian?s responsibility to love and care for all and they believe all life is sacred. Christians believe also that the sanctity of life teaches that each person has a soul, that life is special, holy, and should be valued, as life is precious from the start. Psalm; 139 states ?you knew my inmost being; you knit me together in my mother?s womb?. Also that human life was made in the image of god and is the most special part of creation ?All the days ordained for me were written in your book? The Roman Catholic Church teaches that abortion is never allowed even in cases of rape or when the mother is very young. ...read more.

the womb, I knew you, before you were born I set you apart: I appointed you a prophet to the nations? this suggests that god has plans for us even before we were born and to have an abortion would interfere with gods plans. Yet the Roman Catholic Church is the only Christian church that offers clear teachings about the issue of abortion. The Church of England repeatedly states that abortion is tragic when it occurs but refuses to state that it?s wrong. For most Christians they feel that life begins at the moment of conception but feel as though it?s uncomfortable to suggest that in cases of incest or rape that it would be declared wrong without any consideration. Also in cases where the unborn has encountered severe disabilities that abortion may be the most loving and kindest response for both parents; ?the last resort?. ...read more.

I believe that women should have the right to choose whether or not to have an abortion because I believe although all life Is precious- women may feel as though they couldn?t cope with bringing up a child at that time, a couple may not be financially stable and so it would be unfair for the women to give birth to children who weren?t going to be properly cared and provided for; ?The lesser of two evils?. The women (although in rare cases) may have been subjected to something they didn?t consent to such as rape. Or the women may found that the child has a severe disability and may believe that she would be mentally or physically unable to provide care for this child; and although I did not truly agree with this statement at first I realised that how could others possibly force these women to cope with a disabled child because it is totally there decision made and decided by how they feel and I believe that no one has the right to force upon or make those decisions for them. ...read more.