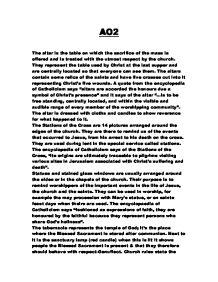 A02 RE Coursework - Churches

The altar is the table on which the sacrifice of the mass is offered and is treated with the utmost respect by the church. They represent the table used by Christ at the last supper and are centrally located so that everyone can see them. The altars contain some relics of the saints and have five crosses cut into it representing Christ’s five wounds. A quote from the encyclopedia of Catholicism says “altars are accorded the honours due a symbol of Christ’s presence” and it says of the altar “…is to be free standing, centrally located, and within the visible and audible range of every member of the worshipping community”. The altar is dressed with cloths and candles to show reverence for what happened to it.

The Stations of the Cross are 14 pictures arranged around the edges of the church. They are there to remind us of the events that occurred to Jesus, from his arrest to his death on the cross. They are used during lent in the special service called stations. The encyclopedia of Catholicism says of the Stations of the Cross, “its origins are ultimately traceable to pilgrims visiting various sites in Jerusalem associated with Christ’s suffering and death”.

Statues and stained glass windows are usually arranged around the sides or in the chapels of the church. Their purpose is to remind worshippers of the important events in the life of Jesus, the church and the saints. They can be used in worship, for example the may procession with Mary’s statue, or on saints feast days when theirs are used. The encyclopaedia of Catholicism says “fashioned as expressions of faith, they are honoured by the faithful because they represent persons who share God’s holiness”.

Candles represent Jesus, the light of the world. Votive candles are used as signs of our individual prayers up to God. The paschal candle represents the resurrection of Jesus and is marked with the Greek Alpha & Omega, the first and last letters of the Greek alphabet to show us that Jesus is the beginning and the end. The encyclopaedia of Catholicism says about candles “…symbol of divine light, purity and holiness” and the votive candles  “… is seen as a way of prolonging prayer”.

The lectern is at the front of the church & to the side of the altar and should be immovable to show that God’s word does not move. It is often ornate in protestant churches and an eagle is often used to show the majesty of God’s word. It is used in worship as the place where the bible readings or other readings are delivered.The encyclopaedia of Catholicism says “”or ambo, the place from which the word is proclaimed”.

The pulpit is at the front of the church and to the side of the Altar. It is often a raised feature so that the priest is raised and therefore very visible. It is used in worship for the priest to deliver his sermon.

The crucifix is a cross with a representation of Jesus' body.It is aprincipal symbol of the Christian religion. It is primarily used in the Catholic, Anglican, Lutheran and Eastern Orthodox Churches and emphasizes Christ's sacrifice— his death by crucifixion. It is usually at the front and centre of the church and there can be others, in side chapels etc. Some figures on the cross will be off Christ the king, these are used to focus on the belief that he rose again. The encyclopedia of Catholicism says “a cross that bears the image of the crucified Christ, a common devotional; object in catholic churches and households”.

In modern churches Baptismal fonts are placed at the back of the church, in older churches at the front & side. They are used in worship for the sacrament of baptism & at the Easter vigil. It reminds us of the baptism of Jesus & that baptism leads us to eternal life. The encyclopaedia of Catholicism says “by their shape, size or other visual feature, they depict symbolic aspects of the sacrament, e.g. death and resurrection, water and new life”.

The water stoup is usually in the entrance of the church and is used to spiritually cleanse someone before they enter the church. The encyclopaedia of Catholicism says “is therefore used to express the person’s wish to be spiritually clean before entering the church building”.

The church is a building used for prayer, worship, or other public religious services. A common architecture for churches is the shape of a cross. These churches also often have a dome or other large vaulted space in the interior to represent or draw attention to the heavens. The encyclopaedia of Catholicism says “the church is a symbol of heaven, of the world as it should and could be”.