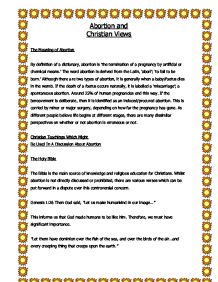 Abortion and Christian Views The Meaning of Abortion By definition of a dictionary, abortion is 'the termination of a pregnancy by artificial or chemical means.' The word abortion is derived from the Latin, 'abori'; 'to fail to be born.' Although there are two types of abortion, it is generally when a baby/foetus dies in the womb. If the death of a foetus occurs naturally, it is labelled a 'miscarriage'; a spontaneous abortion. Around 25% of human pregnancies end this way. If the bereavement is deliberate, then it is identified as an induced/procured abortion. This is carried by minor or major surgery, depending on how far the pregnancy has gone. As different people believe life begins at different stages, there are many dissimilar perspectives on whether or not abortion is erroneous or not. Christian Teachings Which Might Be Used In A Discussion About Abortion The Holy Bible The Bible is the main source of knowledge and religious education for Christians. ...read more.

As previously mentioned, God deems humans the top of the ladder; if he treasures the life of a sparrow, his consideration of a human life must be colossal. Other Christian Teachings The Roman Catholic Church has always declared its opposition to abortion. In the Didache, it mention that it is forbidden to have an abortion, or to kill a new born, "You shall not kill by abortion the fruit of the womb. The Modern Catholic perspective is life instigates at conception; when the sperm and the egg fertilise together and genetic material is created. The Catechism of the Catholic Church states that respect to human life is mandatory and it must be protected from the time of acknowledgement of pregnancy. A definite proclamation is, "Since the first century the Church has affirmed the moral evil of every procured abortion. This teaching has not changed and remains unchangeable." Ways In Which Christians Might Put Their Beliefs Into Action The churches could hand out leaflets to woman, which explain the possible consequences of abortion. ...read more.

If neither life is at stake, then I stand by the Roman Catholic outlook; life is a gift from God and the murder of it is absolutely erroneous. They also believe that life begins at conception, so even contraception is wrong. I also share the same views as Roman Catholics on this topic. Although other people regard a foetus to be just a clump of cells with the potential of life, from the week, the foetus can feel pain; abortion is a murder. If a woman has been raped, then abortion is acceptable, as it is understandable that she wouldn't want a constant reminder of the incident. To speak for people who have other views, if the victim of rape, who has conceived, has an abortion, it is the innocent foetus which given the 'death sentence', not the guilty rapist. If the parent(s) are concerned of the possibility of the child being handicapped/disabled, I believe abortion is still wrong. In some cases, disabilities can be slightly cured; the child has the possibility of having a very much normal life. My overall view on abortion, it's wrong. By Surjeet Mann ...read more.