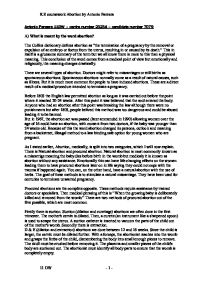 Abortion: do you agree

Antonio Panzera 11DW - centre number 23234 - candidate number 7079 A) What is meant by the word abortion? The Collins dictionary defines abortion as "the termination of a pregnancy by the removal or expulsion of an embryo or foetus from the uterus, resulting in or caused by its death." This in itself is a gruesome summary of the term but we all know there is more to this than a physical meaning. This conclusion of the word comes from a medical point of view but emotionally and religiously, the meaning changes drastically. There are several types of abortion. Doctors might refer to miscarriages or still births as spontaneous abortions. Spontaneous abortions normally come as a result of natural causes, such as illness. But it is much more common for people to have induced abortions. These are a direct result of a medical procedure intended to terminate a pregnancy. Before 1803 the English law permitted abortion as long as it was carried out before the point where it reached 20-24 weeks. After this point it was believed that the soul entered the body. Anyone who had an abortion after this point was breaking the law although there were no punishments but after 1803, people belived this method was too dangerous and could be abused leading it to be banned. ...read more.

Women vary greatly in their emotional response to having an abortion. Research suggests that having an abortion does not lead to long-term emotional or psychological problems. However, some women can experience feelings of sadness or guilt after an abortion, and post-abortion counselling services are widely available for women suffering with this. But before the abortion even happens women can feel pressured and unsure about the procedure as they cannot handle the thought of killing a foetus which will later become a child. Overall abortion is any death of a baby in the womb and its expulsion from the mother's body. The effects being emotional and physical but in the whole there is more to this word then a simple definition. So in conclusion when you ask what is meant of the word you can say that it is to abort a potential life before it has started, medically or naturally. B) What is the Roman Catholic view on abortion? Abortion is the ending of pregnancy before the birth and the Roman Catholic Church would say that this is morally wrong. An Abortion results in the death of an embryo or foetus. Abortion, the Church says destroys the lives of helpless, innocent children. By aborting these unborn infants, humans are hurting themselves; they are not allowing themselves to meet these new identities and unique personalities. ...read more.

The catholic view would go against this opinion but for many young mothers the ordeal and afters of having a baby would be too much to cope with and emotionally there lives may be affected for the worst. Also abortion can be used for incidents like rape. In the case of rape or incest, forcing a woman made pregnant by this violent act would cause further psychological harm to the victim. Often a woman is too afraid to speak up or is unaware she is pregnant, thus the morning after pill is ineffective in these situations. Possibly a big factor for abortion is a women's right. The ability of a woman to have control of her body is critical to civil rights. Take away her reproductive choice and you step onto a slippery slope. If the government can force a woman to continue a pregnancy, what about forcing a woman to use contraception or undergo sterilization? In conclusion, I neither agree, nor disagree with the statement. I believe that having an abortion depends on a number of different factors, each contributing equally to whether a woman may or may not choose to have an abortion. Taking into account the knowledge of Christian teachings that I have acquired I still feel that abortion is justifiable in some cases and unjust in others. R.E coursework Abortion by Antonio Panzera 11 DW - 1 - ...read more.