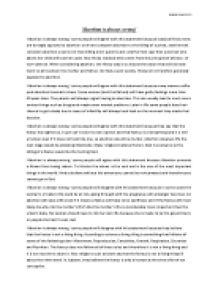 To Hindus the atman is the soul and is the one of the most important things in the world. Hindus believe without the atman you cannot be reincarnated and therefore you cannot go to God. ?Abortion is always wrong,? some people will disagree with this statement because in some cases the woman?s or baby?s life could be at risk, going through with the pregnancy will endanger two lives. An abortion will save a life even if it means a foetus will have to be sacrificed, and if the foetus will most likely die why risk the mother?s life? Also the mother?s life is considerably more important than the unborn baby. No woman should have to risk her own life because she is made to by the government, or people she hasn?t even met. ...read more.

In Sikhism they allow abortion in the case of rape. ?Abortion is always wrong,? some people will disagree with this statement because in many cases women will think they have to get an abortion no matter what, and they will do whatever it takes to do so. Most of the time women resort to back-street clinics where the ?surgeons? charge a lot of money and endanger the life of the woman. They also don?t even use the correct equipment, for example they use coat hangers and knitting needles, thousands of women have died. If the woman is going to have an abortion no matter what, why not make it safe? In conclusion, I think that women should be allowed to have an abortion, because they will always have a reason to have an abortion, whether it is a stupid reason or a clever one, it is their body, their life and therefore their choice. ...read more.