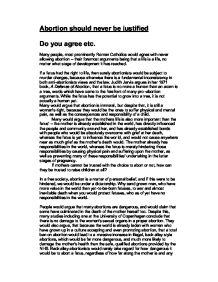 Abortion Should Never Be Justified. Discuss

Abortion should never be justified Do you agree etc. Many people, most prominently Roman Catholics would agree with never allowing abortion - their foremost arguments being that a life is a life, no matter what stage of development it has reached. If a fetus had the right to life, then surely abortionists would be subject to murder charges, because otherwise there is a fundamental inconsistency in both anti-abortionists views and the law. Judith Jarvis argues in her 1971 book, A Defense of Abortion, that a fetus is no more a human than an acorn is a tree, words which have come to the forefront of many pro-abortion arguments. While the fetus has the potential to grow into a tree, it is not actually a human yet. Many would argue that abortion is immoral, but despite that, it is still a woman's right, because they would be the ones to suffer physical and mental pain, as well as the consequences and responsibility of a child. ...read more.

in illegal, back alley style abortions, which would be far more dangerous, and much more likely to damage the mother's health than the safe, qualified abortions provided by the NHS. Back alley abortionists would rarely take regard for how dangerous it would be to abort a fetus, regardless of how far along the mother is and any other conditions she has. Abortion allows women to have sex comfortably, without need for irritating contraceptives, and without worry. No woman wants an abortion, it is merely the best alternative available - many women are unable to have safe births, and pregnancy/birth in many would cause fury, outcry in many communities, as well as leading the baby to be neglected. No one argues for the sanctity of life in animal fetuses and acorns, for example, which suggest humans, are treated as a separate collective entity. Different rules apply to humans than those which apply to other animals - we are different. ...read more.

Abortion advocates 'quality of life' over the 'sanctity of life', devaluing reproduction of the human race, and the value we play on our lives. We may as well decide to smoke, drink and take drugs continuously due to the temporary rush of enjoyment they may produce, despite the lasting after effects which leave families and communities scarred. Abortion also devalues the parent-child relationship - if one sees the fetus as expendable, then surely any existing children would feel the same way! Raising children should be a beautiful, enjoyable process rather than the depiction of difficulty that abortion implies. Muslim beliefs would indicate that abortion is only acceptable when the family is unable to support another child, in cases of rape, and when a baby would prove to be a risk to the mother's health. I would agree mostly with this too; I disagree with the idea that abortion should be there as a back up after irresponsible sex. ...read more.