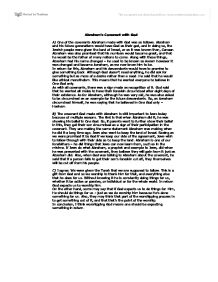 Abraham's Covenant with God A) One of the covenants Abraham made with God was as follows. Abraham and his future generations would have God as their god, and in doing so, the Jewish people were given the land of Israel, or as it was known then, Canaan. Abraham was also promised that his numbers would become great, and that he would be the father of many nations to come. Along with these things, Abraham had his name changed - he used to be known as Avram however it was changed and became Avraham, as we now know him to be. In return for this, Abraham and his descendants would have to promise to give something back. ...read more.

So, as Avraham circumcised himself, he was saying that he believed in One God only - Hashem. B) The covenant God made with Abraham is still important to Jews today because of multiple reasons. The first is that when Abraham did it, he was showing his belief in One God. So, if parents want to further show their belief in this, they get their son circumcised as a sign of their participation in the covenant. They are making the same statement Abraham was making when he did it a long time ago. Jews also want to keep the land of Israel. Seeing as we were promised it by God if we keep our side of the agreement, Jews wish to follow through with their side as to keep the land. ...read more.

C) I agree. We were given the Torah that we are supposed to follow. This is a gift from God and so we worship to thank him for that, and everything else that he does for us. Without knowing it he is constantly doing things for us, whether it be active or passive, or individual or for the whole world. In return God expects us to worship him. On the other hand, some may say that if God expects us to do things for Him, He should do things for us - just as we do worship him because He's done something for us. Also, they may think that part of the worshipping process is to get something out of it, and that that's the point of the worship. In conclusion, I think worshipping God means one should be expecting something in return. ...read more.