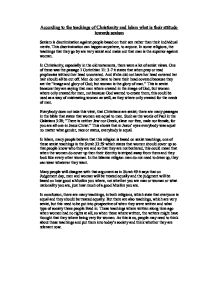 Sexism is discrimination against people based on their sex rather than their individual merits. This discrimination can happen anywhere, to anyone. In some religions, the teachings that they go by are very sexist and make out that man is the superior against woman.

In Christianity, especially in the old testaments, there were a lot of sexist views. One of these was the passage 1 Corinthian 11: 3-7 it states that when pray or read prophecies without her head uncovered. And if she did not have her head covered her hair should all be cut off. Men do not have to have their head covered because they are the “image and glory of God; but woman is the glory of man.” This is sexist because they are saying that men where created in the image of God, but women where only created for men, not because God wanted to create them, this could be used as a way of mistreating women as well, as they where only created for the needs of men.

Everybody does not take this view, that Christians are sexist; there are many passages in the bible that states that women are equal to men. Such as the words of Paul in the Galatians 3:28; “There is neither Jew nor Greek, slave nor free, male nor female, for you are all one-in Jesus Christ.” This shows that in Jesus’ eyes everybody was equal no matter what gender, race or status, everybody is equal.

In Islam, many people believe that this religion is based on sexist teachings, one of these sexist teachings is the Surah 33:59 which states that women should cover up so that people know who they are and so that they are not bothered, this could mean that when the women do cover up then their identity is striped away from them and they look like every other woman. In the Islamic religion men do not need to dress up, they can wear whatever they want.

Many people will disagree with that argument as in Surah 49 it says that on Judgement day, men and woman will be treated equally and the judgment will be based on how good a Muslim you where, not whether you are man or woman or what nationality you are, just how much of a good Muslim you are.

In conclusion, there are many teachings, in both religions, which state that everyone is equal and they should be treated equally. But there are also teachings, which are very sexist, but this need to be put into prospective of when they were written and what type of society these people lived in. These teachings where written along time ago when women had no rights at all, so when these where written, the writers might have thought that they where being very for women. As this is so, people may need to think about these teachings and put them into today’s society and think whether they are relevant now.