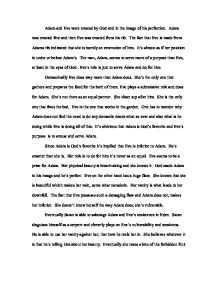 Adam and Eve were created by God and in the image of his perfection. Adam was created first and then Eve was created from his rib. The fact that Eve is made from Adams rib indicated that she is merely an extenstion of him. It's almost as if her position is under or below Adam's. The man, Adam, seems to serve more of a purpose than Eve, at least in the eyes of God. Eve's role is just to serve Adam and do for him. Domestically Eve does way more than Adam does. She's the only one that gathers and prepares the food for the both of them. Eve plays a submissive role and does for Adam. ...read more.

Eve on the other hand has a huge flaw. She knows that she is beautiful which makes her vain, some what narssistic. Her vanity is what leads to her downfall. The fact that Eve posseses such a damaging flaw and Adam does not, makes her inferior. She doesn't know herself the way Adam does, she's vulnerable. Eventually Satan is able to sabotage Adam and Eve's exsistence in Eden. Satan disguises himself as a serpent and cleverly plays on Eve's vulnerability and weakness. He is able to use her vanity against her, that how he reels her in. She believes whatever it is that he's telling him about her beauty. Eventually she takes a bite of the forbidden fruit and falls from grace. ...read more.

The sin of Adam and Eve caused the rest of mankind to suffer. Women were burdened with painfull childbirth and menstrual cycle. Now that man has sinned Jesus will have to die in order to save man. Eve's role throughout "Paradise Lost" varies. In the beginning she's domestic and seems to be submissisve. She fulfills the typical stereotype of a primitive, uneducated, submissive woman. As the story progresses Eve's role shifts. The fact that she sins first indicates that she's pulling away from her "role" in the garden of Eden. She's tired of being oppressed and living in the shadow of Adam. The shift in Eve in true to life of the shift that modern women have seen. In modern day society the role of women isn't what it used to be. These days women can have carrers, have children, and choose not to get married. ...read more.