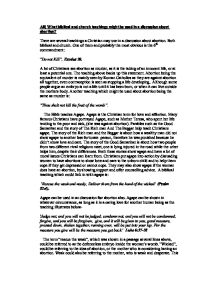 Aii] What biblical and church teachings might be used in a discussion about abortion?

Aii] What biblical and church teachings might be used in a discussion about abortion? There are several teachings a Christian may use in a discussion about abortion. Both biblical and church. One of them and probably the most obvious is the 6th commandment: "Do not Kill", Exodus 20. A lot of Christians see abortion as murder, as it is the taking of an innocent life, or at least a potential one. The teaching above backs up this statement. Abortion being the equivalent of murder is mainly seen by Roman Catholics as they are against abortion all together, even contraception is seen as stopping a life developing.. Although some people argue an embryo is not a life until it has been born, or when it can live outside the mothers body. Another teaching which might be used about abortion being the same as murder is: "Thou shalt not kill the fruit of the womb". The Bible teaches Agape. Agape is the Christian term for love and affection. Many famous Christians have portrayed Agape, such as Mother Teresa, who spent her life tending to the poor and sick, (she was against abortion). Parables such as the Good Samaritan and the story of The Rich man And The Beggar help teach Christians agape. The story of the Rich man and the Beggar is about how a wealthy man did not show agape to another less fortunate person, therefore he was punished because he didn't show love and care. ...read more.

It is a Christian theory and is used in many ethical discussions. It basically means in a certain situation its okay to do what's ethically right. For example if you or someone you love if being harmed then it is ethically okay to defend yourself maybe even to the extent of death or manslaughter. This links in with abortion because if the woman has become pregnant against her free will (rape), or she suffers with a physical or mental disability then some Christians may accept the fact that abortion may be the only answer. Except Roman Catholics who believe abortion is wrong under all circumstances, and try their best to dissuade anyone who is or thinks about having an abortion, and shuns anyone who does. Mother Teresa was a famous Christian figure who was against abortion, and many of her teachings are used in discussions. She speaks about abortion in a very meaningful and powerful way. Her quotes have even been published in The Wall Street Journal. Teachings from this famous religious figure would be a powerful tool in favour of anti-abortion in a discussion: "It is a poverty to decide that a child must die so that you may live as you wish." and "Any country that accepts abortion, is not teaching its people to love, but to use any violence to get what it wants." ...read more.

Terminating them through abortion is not only a waste of something other people would do anything to have it is also an insult to God by destroying something he has blessed you with. Although there are a lot of teachings in the Bible that are linked in with abortion, there are none specifically written about abortion, for or against. There are some passages that contradict the Roman Catholic belief that life begins at birth. According to the Bible life begins when the baby draws its first breath. This conclusion is drawn from Adam in the creation story when God: "...breathed into his nostrils the breath of life; and man became a living soul." Genesis 2:7 There is proof also that the Bible and maybe even God is not 100% pro-life. When God ordered Moses to massacre 24,000 Israelites: "Take all the heads of the people, and hang them up before the Lord against the sun." Numbers 25:4-9 There are many passages in the Bible which give this same impression: * "Give them a miscarrying womb and dry breasts." Hosea 9:14 * "They shall have no pity on the fruit of the womb; their eyes shall not spare children." Isaiah 13:18 * "Dash their children, and rip up their women with child." 2 Kings 8:12 God also gave humans free will. Therefore he wanted them to do as they wish and not as he wished them to. There are many teachings for or against abortion. Both sides would give a powerful argument with some of the teachings shown above. ...read more.