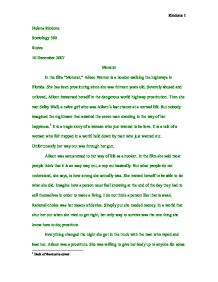 Helena Rindone Sociology 360 Rudes 10 December 2007 Monster In the film "Monster," Aileen Warner is a hooker walking the highways in Florida. She has been prostituting since she was thirteen years old. Severely abused and unloved, Aileen immersed herself in the dangerous world highway prostitution. Then she met Selby Wall, a na�ve girl who was Aileen's last chance at a normal life. But nobody imagined the nightmare that awaited the seven men standing in the way of her happiness.1 It is a tragic story of a woman who just wanted to be love. It is a tale of a woman who felt trapped in a world held down by men who just wanted out. Unfortunately her way out was through her gun. Aileen was accustomed to her way of life as a hooker. In the film she said most people think that it is an easy way out, a cop out basically. But what people do not understand, she says, is how strong she actually was. ...read more.

An aversive stimulus leads the person to experience negative effect, which instigate "reactive" or "expressive aggression." Expressive aggression satisfies an innate desire to harm others when one is feeling bad or frustrated. So this may explain why she killed the first one. Does explain the other six? Being raped in the woods can ultimately explain what set Aileen off, but why did she continue? One might be able to theorize this way. Aileen was control of her life. She chose to prostitute as her way of living. She did not have much of anything but what she did have was her own. Men who rape women want to show their dominance and that they are in control. The text states that, "men who rape or assault their wives are attempting to dominate them or display their power.."4 Aileen went from being in control to being taken over by a man. Aileen in the movie said she did not like the prostituting but that she more or less sucked it up. ...read more.

She states how people could stop her from getting jobs and being a part of the society but that they could not stop her from killing; that it was her job to get rid of these men. Aileen never specifically talks about her upbringing but leads us to speculate that is was not good. As the text states, "criminologists have found a correlation between female's violent victimization, especially during childhood, and their subsequent involvement in crime, including crimes of violence."6 One thing that Aileen knew was violence and although she tried to change she ultimately fell back to what she knew. In the end of the movie Aileen screams out, "I'm a good person, I'm a good person!" One can no doubt argue that she was a good person. She just happened to make bad choices. Were they justified? One can also argue both ways. Was it wrong of her to want to rid the world of bad men?; especially after her experiences. With all the pain she endured in her life it is no wonder the events that occurred in her life. Unfortunately in our society her choices simply can not be rationalized. ...read more.