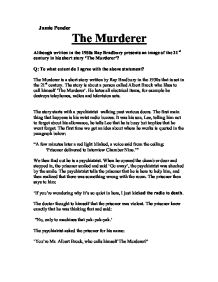 Although written in the 1950s Ray Bradbury presents an image of the 21st century in his short story 'The Murderer'? - To what extent do I agree with the above statement?

Jamie Pender The Murderer Although written in the 1950s Ray Bradbury presents an image of the 21st century in his short story 'The Murderer'? Q: To what extent do I agree with the above statement? The Murderer is a short story written by Ray Bradbury in the 1950s that is set in the 21st century. The story is about a person called Albert Brock who likes to call himself 'The Murderer'. He hates all electrical items, for example he destroys telephones, radios and television sets. The story starts with a psychiatrist walking past various doors. The first main thing that happens is his wrist radio buzzes. It was his son, Lee, telling him not to forget about his allowance, he tells Lee that he is busy but implies that he wont forget. The first time we get an idea about where he works is quoted in the paragraph below: "A few minutes later a red light blinked, a voice said from the ceiling: 'Prisoner delivered to Interview Chamber Nine.'" ...read more.

'Fine. The first victim, or one of the first, was my telephone. Murder most foul. I shoved it in the kitchen Insinkerator! Stopped the disposal unit in mid-swallow. Poor thing strangled to death. After that I shot the television set!' At this point it becomes obvious that Brock despises electrical items and that he is on a personal vendetta against them and won't rest until he has destroyed all the electrical items that pass before him. The imagery he uses in the quote above is interesting, as it is very detailed. Other examples of this are below: "Hey, Al, thought I'd call you from the locker room out here at Green Hills. Just made a sockdolager hole in one! A hole in one, Al! A beautiful day. Having a shot of whiskey now. Thought you'd want to know, Al!" Convenient for my office, so when I'm in the field with my radio car there's no moment when I'm not in touch. In touch! There's a slimy phrase. Touch, hell. Gripped! Pawed, rather. Mauled and massaged and pounded by FM voices." "'It frightened me as a child. ...read more.

"' Remember that Gilbert and Sullivan song - "I've Got It on My List, It Never Will Be Missed" I find it very strange that Mr Brock likes any form of music. Earlier on in the passage he kicked the radio to death and he has probably destroyed many Hi-Fi's in his time. Everything taken into consideration, I do not agree to a great extent that Ray Bradbury is presenting a view of the 21st century in his short story, 'The Murderer'. The majority of people in the 21st century today are happy with modern technological items. Anywhere you go, you're bound to see people with mobile phones. A very high amount of people own a computer and virtually everyone owns a TV. It is hard to believe that anyone in this day and age would go around kicking radios to death, shove a telephone into a sink or shoot the television set. Mr Brock is a person who definitely likes living in the past, and although some people don't like or own televisions and telephones, they would not go out of their way to destroy them. For these reasons I do not believe Ray Bradbury presents an accurate image of the 21st century. ...read more.