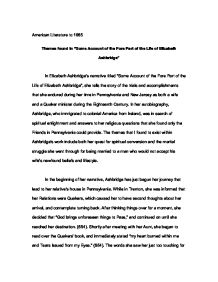 American Literature to 1865 - Themes found in &quot;Some Account of the Fore Part of the Life of Elizabeth Ashbridge&quot;.

Her husband took the man's directions, and they continued on their way. The next house they lodged at happened to be the home of Friends, who treated the couple with kindness and respect. The woman managed to convince Ashbridge's husband to let her attend a Meeting, and she was ever so grateful, since she "had not been at one for near four months." (660). Although her husband still despised of her being a Quaker, Ashbridge managed to renew her faith and believe in the work of God once again. The next meeting quickly approached, and Ashbridge asked for her husband's consent to go. He was still stubborn, and in a rage, told her she would not be allowed to go. Because of this, Ashbridge concluded her husband "was Inflexible & Would not Consent," leaving her no choice but to leave on her own and find a way to the Meeting. (660). Ashbridge was so determined to attend Meetings, that even having an old pair of worn out shoes would not stop her from going, ...read more.

(663). After another night of drinking, her husband enlisted in the Army. Ashbridge blamed herself and her behavior for the reasons why he joined the military, and could do nothing but pray until she found out about his death. After his death, Ashbridge concluded she "never thought him the Worst of Men," and that she loved him regardless of the pain he put her through, both mentally and physically. (664). With her husband now gone, she was able to freely practice her Quaker religion, without anyone holding her back or denying her from going to Meeting. In conclusion, Ashbridge's work is one that will continue to live on as a story about a woman who managed to rise above religious and personal standards that existed during the 1700's. While Ashbridge lost her spiritual focus due to extensive traveling during the beginning of her journey, she was miraculously able to regain a stronger perspective on her own religious faith and culture, which ultimately helped her to get a hold of both her personal life with her husband and her life as a Quaker. ...read more.