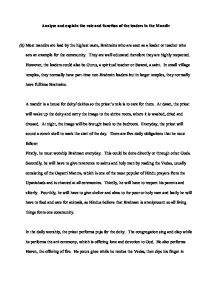 Analyse and explain the role and function of the leaders in the Mandir (ii) Most mandirs are lead by the highest caste, Brahmins who are seen as a leader or teacher who sets an example for the community. They are well educated therefore they are highly respected. However, the leaders could also be Gurus, a spiritual teacher or Swami, a saint. In small village temples, they normally have part-time non-Brahmin leaders but in larger temples, they normally have fulltime Brahmins. A mandir is a house for deity/ deities so the priest's role is to care for them. At dawn, the priest will wake up the deity and carry the image to the shrine room, where it is washed, dried and dressed. ...read more.

Thirdly, he will have to respect his parents and elderly. Fourthly, he will have to give shelter and alms to the poor or holy men and lastly he will have to feed and care for animals, as Hindus believe that Brahman is omnipresent so all living things form one community. In the daily worship, the priest performs puja for the deity. The congregation sing and clap while he performs the arti ceremony, which is offering love and devotion to God. He also performs Haven, the offering of fire. He pours ghee while he recites the Vedas, then dips his finger in water and touches his ears, nose, mouth, eyes, arms, body and legs, while the congregation copies. ...read more.

Priests have to take part in religious ceremonies, festivals and are invited to conduct rites of passages (Samskaras) such as the Naming Ceremony (Namakarana). After a baby is born, the priest will conduct rituals and cast a horoscope to determine the first letter of the baby's name. In the Sacred Thread Ceremony (Upanayana), which is a ceremony to mark the transition to adulthood of a boy, the priest chooses the date that is best for it. He conducts homa, a special sacred fire ritual and presents him to his household gods. In the Marriage Rites (Vivaha), the priest looks up the partners' horoscope to find the date that is best for the wedding. He recites verses from the Vedas and blesses the couple for a long and prosperous marriage. ...read more.