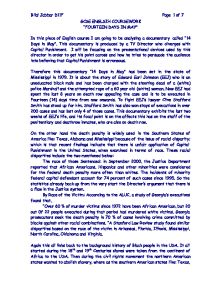 GCSE ENGLSIH COURSEWORK "FOURTEEN DAYS IN MAY" In this piece of English course I am going to be analysing a documentary called "14 Days in May". This documentary is produced by a TV Director who diverges with Capital Punishment. I will be focusing on the presentational devices used by this director in order to get his point across and how he tries to persuade the audience into believing that Capital Punishment is erroneous. Therefore this documentary "14 Days in May" has been set in the state of Mississippi in 1979. It is about the story of Edward Earl Johnson (EEJ) who is an uneducated black male and has been charged with the shooting dead of a (white) police Marshall and the attempted rape of a 60 year old (white) woman. Now EEJ had spent the last 8 years on death row appealing the case and is to be executed in Fourteen (14) days time from now onwards. To fight EEJ's lawyer Clive Stafford Smith has stood up for him. Stafford Smith has also won stays of executions in over 200 cases and has lost only 4 of those cases. This documentary exhibits the last two weeks of EEJ's life, and its focal point is on the affects this has on the staff of the penitentiary and deathrow inmates, who are also on death row. On the other hand the death penalty is widely used in the Southern States of America like: Texas, Alabama and Mississippi because of the issue of racial disparity; which is that recent findings indicate that there is unfair application of Capital Punishment in the United States, when examined in terms of race. These racial disparities include the two mentioned below: The race of those Sentenced: in September 2000, the Justice Department reported that African Americans, Hispanics and other minorities were considered for the federal death penalty more often than whites. ...read more.

EEJ's appearance causes a great amount of disturbance in the audience because he doesn't look like the person who would commit a crime, so I think it makes the audience want to take action about this situation. Behind every documentary there is an objective and a message that each director tries to get across to the audience. In order for the director to build his argument and get the audience to strongly agree on his point of view, he needs to film the documentary in a place where the events are realistic and you would expect such events to occur. Again that I what I think is the reason why the director chose to make the film in a Mississippi Penitentiary, because as the statistics already mentioned show that black people have been treated unfairly because of the colour of their skin. This gives a crystal clear message to the audience that there are racial disparities in death penalty cases. So therefore from the very start the director starts to persuade the audience into thinking that capital punishment is wrong because it is treacherously used in some places lie Mississippi. By making the documentary in Mississippi penitentiary the director tries to give a message that coloured people are treated badly I the southern states of America, all linking back to the time of slavery. In order to get his aim across and convince the audience into believing that Capital Punishment is wrong, the director uses the repeated imagery (presentational device) to remind the viewers of the history of slavery and racism that was is in Mississippi. From the very start of the documentary you see white guards on horses and the prisoners (mainly black chained together) working on plantations. Linking back to the slavery days when black slaves (chain gangs) worked on farmland and plantations and their white owners use to treat them badly. ...read more.

It made me personally feel sorry for EEJ but also made me against capital punishment. It makes the audience want to take action against the Justice System in the USA. Just to make sure that the audience goes away thinking or taking action against the reality, the director needed the conclusion of the case. And who could do that well than the lawyer himself, who ends the film by saying: "It's a sick world" This statement makes the audience think really in depth if capital punishment and if it is right? The information which proves Johnson's freedom is given as a ticker tape: 'Since EEJ was executed his lawyers have located a black woman who was with EEJ in a pool hall throughout the time of the crime. At that time, she went to the courthouse to volunteer her testimony but was told by a white law enforcement officer to go home and mind her own business'. The ticker tape is used to conclude the case and it is specifically used by the director to provoke reactions in the audience so they get insight of the story. Therefore I personally believe that Capital Punishment is acceptable because I am Muslim and in Islam it says that we should punish the bad even with death. However watching the documentary "14 Days in May" has made me think if Capital Punishment should be or shouldn't be allowed. That is because of the arguments put forward, such as: there is always a possibility that the defendant is innocent, also people don't always get a fair trial either because their race or economic status. Also the family of the defendant goes through mental torture. These arguments have indeed persuaded my belief in Capital Punishment, and I have been persuaded to go against capital punishment. I think that television documentary can be objective and neutral in some cases. Usually it takes one side of the story. Like in EEJ's case they say he is innocent but they don't really look into the fact he shot the police Marshall dead 5 times. Bilal Jabbar D11F Page 1 of 7 ...read more.