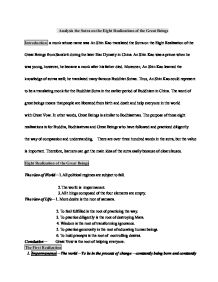 Analysis the Sutra on the Eight Realizations of the Great Beings.

Analysis the Sutra on the Eight Realizations of the Great Beings Introduction: a monk whose name was An Shin Kao translated the Sutra on the Eight Realization of the Great Beings from Sanskrit during the later Han Dynasty in China. An Shin Kao was a prince when he was young, however, he became a monk after his father died. Moreover, An Shin Kao learned the knowledge of sutras well; he translated many famous Buddhist Sutras. Thus, An Shin Kao could represent to be a translating monk for the Buddhist Sutra in the earlier period of Buddhism in China. The word of great beings means that people are liberated from birth and death and help everyone in the world with Great Vow. In other words, Great Beings is similar to Bodhisattvas. The purpose of these eight realizations is for Buddha, Bodhisattvas and Great Beings who have followed and practiced diligently the way of compassion and understanding. There are over three hundred words in the sutra, but the value is important. Therefore, learners can get the main idea of the sutra easily because of clear clauses. Eight Realization of the Great Beings The view of World-1.All political regimes are subject to fall. 2.The world is impermanent. 3.All things composed of the four elements are empty. The view of Life-1. More desire is the root of samsara. 2. To feel fulfilled is the root of practicing the way. ...read more.

For example, some businessmen speak sweet words, and flatter someone in order to make more money and property. Thus, it is a fact that more desire brings more sufferings. Another proverb also proves the point, " the less desire a man has, and the less disappointment he owns." So it is important for people to have few desires and ambition. Since if people have fewer desires, their minds will be full of upright and happiness without inappropriate request. Then, our bodies and minds are free from worldly cares. The Third Realization Human beings-1.to be always searching for possessions > 2.never to feel fulfilled> Bodhisattvas-1.to remember the principle of having few desire.> 2. To live a simple life in peace in order to practice the way> The Third Realization means to fell fulfilled is the foot of practicing way. Similarly, people have to get rid of desire if they want to liberate from samsara. Moreover, people also have to be content with what they have. However, people who are not satisfied won't enlighten the path. In my opinion, I believe that most people live in the narrow world of getting fame and property without satisfaction, and then they waste their lives with misery. What a pity! Since the evil of the world and the misfortune of life both result from unfulfilled minds. Most important of all, people should learn how to feel satisfied with few possessions. ...read more.

2.to treats everyone equally and with compassion. The seventh Realization means to hold precepts are the root of controlling desires. Most people in the world who don't have wisdom thinks it is very happy to seek more five categories of desires. Those who have achieved enlightenment realize the five categories of desires may arise mistakes, even though it is possible to suffer the cycle of birth and death. Different kinds of Buddhists have different ways to enlighten. For example, Laypeople at least should keep the five precepts. Not to kill with kindness. Not to steal with righteousness. Not to have wrong sex with good manners. Not to lie with honest. Not to drink with clear mind. The five precepts are the foundation of being people. In other words, being a good people, and it goes without saying to achieve enlightenment. According to the sutra, although laypeople don't' become monks, they still have to keep their minds with monastic precepts. One part of people's life is supposed to be alike monastic life. As for monks or nuns, they have to be away from faults and desires. Most important of all, they usually have Great Vows to bring happiness to the world and to remove people's suffering. Moreover, monks and nuns often are supposed to practice the way of bodhisattva as great as they can. Finally, they can educate and help people with Mahayana love. ...read more.