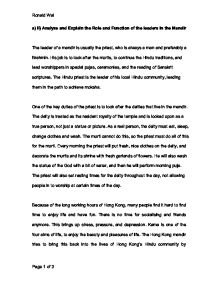 a) ii) Analyze and Explain the Role and Function of the leaders in the Mandir The leader of a mandir is usually the priest, who is always a man and preferably a Brahmin. His job is to look after the murtis, to continue the Hindu traditions, and lead worshippers in special pujas, ceremonies, and the reading of Sanskrit scriptures. The Hindu priest is the leader of his local Hindu community, leading them in the path to achieve moksha. One of the key duties of the priest is to look after the deities that live in the mandir. The deity is treated as the resident royalty of the temple and is looked upon as a true person, not just a statue or picture. ...read more.

Kama is one of the four aims of life, to enjoy the beauty and pleasures of life. The Hong Kong mandir tries to bring this back into the lives of Hong Kong's Hindu community by organising group dinners and meetings, so that the Hindus in Hong Kong can escape the pressure of work for once. The priest in the mandir must also pass on the traditions of the Hindu faith. Because of his upbringing, the priest will know Sanskrit and of all the special pujas and rituals. Therefore, he will be able to show the other worshippers, who do not know of these things, how to perform the rituals and hold the correct festival celebrations. He will also be able to read out all the ancient scriptures, which are written in Sanskrit. ...read more.

These festivals would include Holi, Divali, and Krishna's birthday. The ceremonies would include the naming ceremony, the four stages of life, and wedding ceremonies. Without these ceremonies and festivals the Hindu faith would be lost and worthless, because these things are such a big part of Hindu tradition. Finally, the priest is the person who takes care of the donated money to the temple. Because of his well-educated upbringing, he will be a moralistic and ethical person, knowing right from wrong, and will use the money in the best way possible. This could mean giving the money to charity, using it to care for beggars who need medical help or a bit of food, or to maintaining the temple. If it was a normal person leading the mandir, the money would be likely to be used for selfish reasons. Ronald Wai Page 1 of 3 ...read more.